Who says it doesn’t “pay” to watch TV these days? This notion was certainly true for the Ewing family of Canton recently. Katarra Ewing, the mother of the family, was watching the “Anderson” TV talk show program a few months ago – the show starring journalist Anderson Cooper in New York. She applied for a vehicle through the “Anderson, I Need Your Help for the Holidays!” segment and because the Ewing family was transportation challenged, they were eventually chosen to receive a free 2012 Chrysler Town & Country minivan. The Ewings had struggled through a series of hoopty cars, unemployment and the like, so back in December they made a business case for help from the TV show. Here in late February, that help arrived in the form of that new minivan, courtesy of Chrysler brand together with the “Anderson” daytime show. The Ewings received the keys to the vehicle and the minivan itself last week. “Sunroof, navigation, power everything, should make the daily commutes a lot easier,” said Bruce Velisek, Chrysler brand head of Large Car and MPV Marketing. “So we’re excited for the opportunity to work with you guys and present you with a 2012 Town & Country.” Replied Katarra, “It’s beautiful, it’s beautiful – it only has seven miles on it, too.” No price was put on the vehicle, but Chrysler’s public web site shows 2012 Chrysler Town & Country minivans’ MSRP starts at $29,900, before all of the options such as uConnect and video screens. 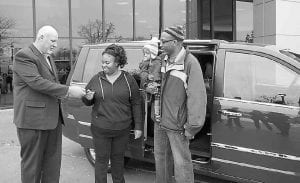 Chrysler executive Bruce Velisek, left, hands the keys to this 2012 Chrysler Town & Country minivan to the Ewing family of Canton as part of a promotion together with the “Anderson” Cooper TV show.