Award-winning musical coming to The Whiting 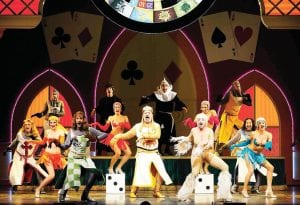 The cast of Monty Python’s Spamalot.

FLINT
— The Tony Award-winning Best Musical of 2005, Monty Python’s Spamalot, will visit the fair city of Flint for two performances at 8 p.m. on Oct. 21-22 at Flint’s Premier Performing Arts Venue, The Whiting.

Lovingly “ripped-off” from the internationally famous comedy team’s most popular motion picture, Monty Python and the Holy Grail, Monty Python’s Spamalot is the winner of three 2005 Tony Awards including Best Musical and Best Director (Mike Nichols), as well as the Drama Desk and Outer Critics Circle awards for Best Musical.

Based on the Tony Award winning direction of Mike Nichols and the riotous choreography of Casey Nicholaw, Monty Python’s Spamalot features a book by Eric Idle, based on the screenplay of Monty Python and the Holy Grail by Monty Python creators Graham Chapman, John Cleese, Terry Gilliam, Eric Idle, Terry Jones and Michael Palin, with music and lyrics by the Grammy Award-winning team of Mr. Idle and John Du Prez.

Telling the legendary tale of King Arthur and the Knights of the Round Table, and their quest for the Holy Grail, Monty Python’s Spamalot features a chorus line of dancing divas and knights, flatulent Frenchmen, killer rabbits and one legless knight. Monty Python’s Spamalot is produced by Stephen B. Kane, Michael McFadden and Phoenix Entertainment.

Mike Nichols has been acclaimed as one of the great American directors in film, theater and television. He has won the Academy Award and eight Tony Awards. He recently received the Directors’ Guild of America Award for Lifetime Achievement as well as a DGA Award for the direction of the HBO adaptation of Angels in America.

Aside from his work with Monty Python in films and on TV, Eric Idle has written a West End play, Pass the Butler; three novels, including The Road to Mars, The Rutles — A Mockumentary; and many songs too rude to mention.

He has sung opera, acted in movies, appeared on television and crossed America performing comedy on The Greedy Bastard Tour. His diary of his 15,000 mile journey by bus was recently published by Harper Collins, and his long-awaited sequel The Rutles 2: Can’t Buy Me Lunch was released by Warner Video in March. There’s no saying what he might do next.

John Du Prez has composed more than 20 feature film scores including A Fish Called Wanda, A Private Function, The Meaning of Life, Personal Services, UHF, and Teenage Mutant Ninja Turtles I, II & III. He has worked with Eric Idle since 1978.

Monty Python isn’t a person, but a group of British actors and writers (and one American) that performed their famous comedy show Monty Python’s Flying Circus on the BBC from 1969 to 1974, with subsequent international fame and success.

The Whiting is located at 1241 E. Kearsley St. in Flint, just off I-475 between the University of Michigan Flint and Mott Community College on the Flint Cultural Center campus. — G.G.