Back to the BRICKS

Tune-up party kicks off with a big turnout 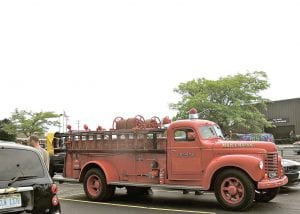 FLINT TWP. — A record number of classic car owners cruised into the parking lot at Genesee Valley Center shopping mall on Monday afternoon to mingle and look over a variety of vintage vehicles during the fourth annual Back to the Bricks Tune-up Party.

It was the first of seven being held this week as a warm-up for the annual car cruise in and around downtown Flint Aug.12-16.

The two-part Flint Township tune-up event was scheduled for 2-4 p.m. at the mall before cruising down Miller Road to set up in the lot of Duke’s Car Stereo from 5-7 p.m.

Eager car owners showed up early at the mall with about 25 cars already on the lot a half an hour before the event officially began. And they just kept coming until an estimated 250 cars filled the lot – the best showing ever, organizers said.

Looming storm clouds, as the day wore on, appeared to have scared off some of the usual evening crowd at the Duke’s portion but ample numbers of vehicles and spectators filled Duke’s lot and surrounding lots. 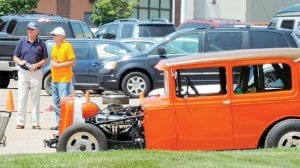 Among many standout entries were an antique fire engine and a ‘60’s panel sided station wagon complete with a loaded luggage rack on top, bringing back memories of many family road trips during that halcyon era.

Tune-up parties continue through Saturday, hosted by other communities. For more info, see the schedule at .www.backtothebricks.org/ schedule/documents/2014/BttB%20 Tune%20Up%20Party.jpg

Upcoming Back to the Bricks events will include an Open House at Flint Assembly, 3100 Van Slyke Road, from 8 a.m. to 5 p.m. Aug. 12, giving visitors an inside look at how GM’s popular pickups are assembled. Plant tours will take place between 9 a.m. and 2 p.m. 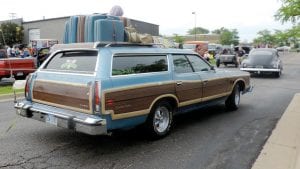 How’s this for a trip down memory lane? This 1960s-era station wagon was loaded with luggage reminiscent of family vacations. At right, tin cans like this one aren’t something you spot on the road every day.

Flint Assembly also plans to recognize inductees in its new Million Mile Club of people who own vehicles built at Flint Assembly that have logged 1 million miles or more. Since opening in 1947, Flint Assembly has built more than 13 million cars and trucks, including the first Corvettes, the iconic Bel Air and, more recently, full-size pickups. 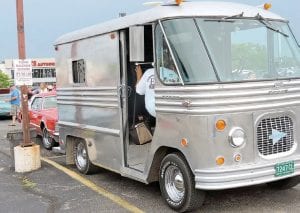