Helping Michigan get back on track 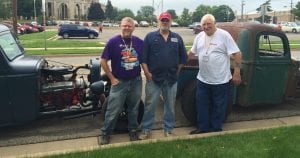 The Hazel brothers and their father Pat were just a few of the nearly 200 participants in the Back to the Bricks promotional tour held earlier this month.

Editor’s note: View Newspaper Group is proud to be a Platinum Sponsor of Back to the Bricks and the official publisher of the Back to the Bricks event guide which will arrive as part of our Aug. 6 editions. Below is the first in a series of feature stories surrounding the event.

FLINT –— The downtown area of Flint was paved with bricks in 1898 and was re-bricked in 1936, meaning some of the bricks found in Flint date back 79 years or more. Taking its name from this landmark feature, the event created to help to restore the downtown area that once buzzed with life, the annual Back to the Bricks event will be back in Flint and the greater Flint area Aug. 11 to 15 this year.

More than just a one-day car show, Back to the Bricks is in the works yearround. A promotional tour that started Friday, June 12 took local car enthusiasts to Battle Creek, Whitehall, Manistee, Boyne City, West Branch and East Tawas. The tour invites car devotees living in those communities to come out, celebrate automotive design and culture, and hopefully make their way to Flint in August for the main event. 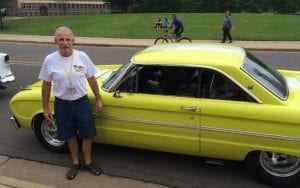 Pat White, who was traveling with his wife on the promotional tour, and their1963 Ford Falcon.

Founded by Al Hatch 10 years ago, Back to the Bricks has grown to include more than just vintage cars. The promotional tour being one of those additional features, all with the goal of inviting more people to the Flint area and helping spread the word about all that the great state of Michigan has to offer.

“The promo tours also help to promote and bring revenue to Michigan towns,” said Hatch. “We need to keep Michigan alive and growing. Our Pure Michigan has so much to offer us. We as classic car owners need to get the word out to the world.”

Other additions to the Back to the Bricks event are a concert set for Friday, Aug. 14 in Grand Blanc this year and tune up parties taking place in surrounding communities including Davison, Clio, Linden, Fenton, Mt. Morris and Flint Township the week leading up to the main event.

All of these events are for people and cars of all ages, types and backgrounds, something that was clear during the kickoff of the promotional tour. Another thing that was clear – the impact that Back to the Bricks is having on the Flint area is not going unnoticed.

Flint Mayor Dayne Walling made an appearance at the introductory breakfast on June 12. Mayor Walling said, “This is a spectacular event and it’s an excellent way for drivers from all over to experience Pure Michigan.”

The promotional tour alone this year included 182 registered vehicles driven by families, solo car veterans, fathers and sons and even couples on a car cruise get-a-way.

Grand Blanc resident, Mike Hazel has participated in Back to the Bricks since 2007, traveling with his brother Robert and their father Pat, each riding in his own vintage customized Ford.

“I can’t wait every year to go,” Mike said. Robert added, “The great thing about the promo tour is that they don’t take you down the expressway. You get to see all this stuff you never get to see, all these little places and shops that you’ve never seen before, a big part of this event is how much it helps everyone all over Michigan.”

The Hazel brothers have toured all over the country with their father Pat in their Fords and previously in their own custom Henry J model autos. The Hazels don’t worry about the potential perils of driving their vintage cars on the road. “The best part about Back to the Bricks is that everybody gets involved, we all help each other if anyone breaks down,” Pat added.

Pat White, of Harbor Beach, was traveling with his wife in his lime green 1963 Ford Falcon. White said, “Most auto-nuts transport their vintage cars in trailers, I say to hell with that! Drive ‘em!”

Despite its growth – Back to the Bricks is expected to draw close to 500,000 people to downtown Flint this year – Hatch and his Back to the Bricks team are not slowing down. “This is only the start,” Hatch said. “Beautiful cars are going to be helping Michigan flourish all summer.”

For more info on Back to the Bricks events visit www.backtothebricks.org.