Back to the Bricks cancels remaining events 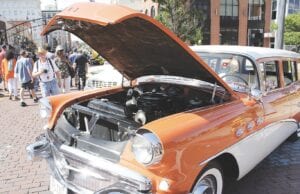 FLINT — Organizers of Back to the Bricks have decided to cancel the remaining events scheduled for Aug. 3-15 over concerns for the health and welfare of guests, collector car owners, volunteers and vendors.

Amber Taylor, executive director for Back to the Bricks, made the announcement in a press release July 13. She said the decision was made after careful consultation with the Executive Committee.

“Following increased and overwhelming concerns about the COVID-19 virus, we felt this was the best way to proceed during such an unprecedented global situation,” said Taylor. “We are very disappointed that we are unable to hold this event for our fans, sponsors, and supporters, but we know it’s the right decision based on the information we have today.”

Taylor went on to say Back to the Bricks greatly appreciates its generous sponsors and partners, further praising “amazing dedicated volunteers that make our events happen, and the loyal car enthusiasts for your continued support.”

She said the organization tried to do everything it could to continue Back to the Bricks traditions, but as they navigated through the planning and follow the Executive Orders that are currently in place, they found it impossible to go forward.

Back to the Bricks has communicated with all of its sponsors and partners, volunteers, and vendors. Taylor said the committee is already planning on 2021 and how B2B can come back “bigger and better than ever.”

Taylor announced June 25 the cancellation of most Back to the Bricks events, except for Tune-Up parties in suburban communities and a drive-thru event at the U.S. 23 Drive-In that were to take the place of the cruise and main event in downtown Flint.

The Tune Up parties would have changed to “Drive-Thru” events. Aug. 3-8.

They would have also held a “Drive- Thru at the Drive-In” event at U.S. 23 Drive-In on Fenton Road for cruisers only.

These events were cancelled in the Monday announcement. Also on Monday, the 37th Annual Frankenmuth Autofest cancelled its September show.