Back to the Bricks Car Cruise returns 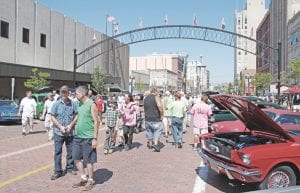 Editor’s Note: View Newspaper Group is proud to be a Media Platinum Sponsor of Back to the Bricks and the official publisher of the Back to the Bricks event guide which can be found in today’s paper. Check out the Event Guide for a full schedule and much, much more.

FLINT — More than 14 years ago, Al Hatch began what would become a monumental annual experience for hundreds of thousands of people, a car show that would invite classic cars and hot rods to the wellknown bricks of Saginaw Street in downtown Flint. That event, Back to the Bricks, has become a phenomenon, growing to become much more than simply a car show. That event, and Hatch’s dream, continue on, and will be underway once again next week in downtown Flint.

As Hatch puts it, “About 14 years ago, I said to some of my buddies, ‘We’re gonna put on a big car show, and we’re gonna do it the same week as the Woodward Dream Cruise.’ And a lot of people thought I was nuts at the time, and for good reason. But, you know, it looks like it worked out quite well for us.”

Kicking off this year’s 14th Annual Back to the Bricks was the annual Promo Tour, which kicked off on June 9 of this year, began in Flint and snaked its way around the lower peninsula, ending in Fenton six days later. The Promo Tour attracted more than 200 vehicles and 400 participants for the nearly 600-mile drive. The event, featured an excursion from Flint to Clare, and continued on throughout Michigan.

According to the event’s website, “the Promotional Tours are a time of adventure and camaraderie for hundreds of classic car owners. The tours are designed to generate enthusiasm for Back to the Bricks with mini car shows in each locale along the way, and tours of automotive facilities and museums for participants.”

Now that the main event is revving up, a number of events and activities to help kick things off have officially begun, which started Monday evening with the first of the annual Tune Up Parties. The nightly events take place on successive days from August 7-12 in Davison, Clio, Linden, Fenton, Flushing/Swartz Creek, and Mt. Morris/Beecher. The free parties consist of car shows, concessions, live music, dancing, giveaways and more.

“Our first Tune Up Party was last night in Davison, and it was definitely the biggest one we’ve ever had,” said Hatch. “And if that’s any indication, we’re going to have a very, very big crowd of people next week for the Back to the Bricks (main event) and throughout the entire week.”

This year’s Back to the Bricks will feature a number of new and exciting events and offerings, starting off with this year’s opening ceremony, which will take place at the historic Applewood Estate on Wed., Aug. 16 at 4 p.m., after which excited crowds will line the streets from downtown Flint to Grand Blanc for the “Rolling Cruises.”

“Our opening ceremony is going to be the best one we’ve ever had,” said Hatch. “It’s just going to be spectacular.”

Along with other scheduled events, including a Cruise ‘N’ Movie, a free concert, a swap meet and a used car corral, Hatch says that there will be a litany of events taking place on Water Street, just two blocks west of the downtown bricks. The recently restored Factory One facility, will be open for tours and boast a display of the Buicks brought in by the Buick Club of America. Hatch says the impressive facility is definitely worth checking out.

“It’s going to be a really great week for Flint and Genesee County,” said Hatch. “We attract people from up to 1,500 miles away, not to mention all the people from Michigan and the surrounding areas. Our crowd estimate is probably about 600,00 people for the week, and about 40,000 cars. It’s pretty great.”