Back to the Bricks dedicates flagpoles in downtown Flint

Names winners of its annual scholarship during presentation 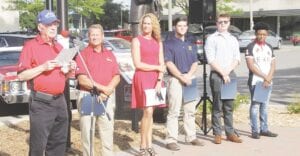 Recipients of the Back to the Bricks scholarship stand to the left of Executive Director Amber Taylor (third from left). From left of Taylor, William B. Bush, Ian Wickhan and Ahmad Williams. Photos by Gary Gould

FLINT — Back to the Bricks may not be happening this summer, due to COVID-19, but that hasn’t stopped the organization from remaining active in its support of Flint and Genesee County.

The Back to the Bricks organization held a dedication ceremony July 30 in downtown named the winners of its annual scholarship competition.

Amber Taylor, executive director of Back to the Bricks, said the flagpoles will add a nice finishing touch to the plaza with its statues of several automotive pioneers, located at the flat parking lot on Saginaw Street.

“We’ve worked together and accomplished some incredible things, like this dedication tonight of these beautiful flagpoles which will now wave our amazing and beautiful American flag high above these iconic automobile pioneers. But also, alongside the historic bricks behind you,” she said.

“It was a wish list item” said Back to the Bricks Chairman Steve Hobson, “I could envision these flags waiving high alongside the arches.” 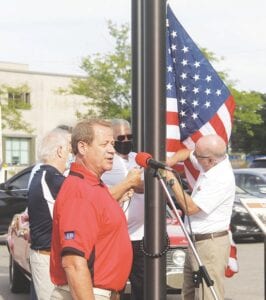 Members of the Board of Directors for Back to the Bricks, along with its founder, Al Hatch, raise the first American flag to fly on the new flagpole.

With COVID-19 he said he wasn’t sure it would be possible to continue their fundraising efforts towards the flagpole goal, but a generous local business owner helped make it possible.

Hobson said the board talked about putting a flagpole at the site but didn’t have a budget for it. Once day, while sitting at his desk he said he received a call from one of B2B’s major sponsors – Attentive Industries, Inc. called him to ask about their annual contribution.

Hobson said sponsors weren’t expected to contribute because the show had been cancelled due to COVID-19, but he said Attentive Industries wanted to help with the flagpole project.

“So that’s how it happened,” he told the crowd at the July 30 dedication.

Back to the Bricks founder Al Hatch was asked to help raise the first American flag of the central pole and they revealed at that time the pole is dedicated to Hatch for his work in founding the annual car show. 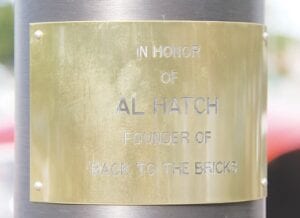 The main flagpole was dedicated to Back to the Bricks Founder Al Hatch.

Board member and scholarship selection committee member Jack Stock, who is also the director of external relations for Kettering University, presented the scholarships during the ceremony.

“So pleased to have the opportunity to present the awards to our recipients tonight this scholarship goes back five years and we’ve given over $50,000 already in scholarships to young people in Genesee County so we’re so pleased that we’re here today to celebrate with you our 2020 recipients,” said Stock.

Named this year as recipients of the $2,000 scholarships were five graduating seniors:

Groat and McGlaughlin were unable to attend.

This is the 5th year Back to the Bricks has presented scholarships to local seniors, in all totaling more than $50,000.