Back to the Bricks events in full swing 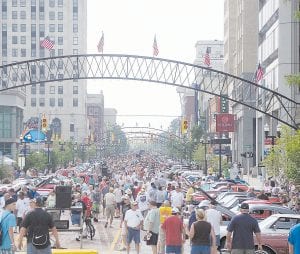 FLINT — In 2004 Al Hatch had a dream to start a car show that would bring cars back to the red bricks of Saginaw Street in Flint. The car show would rival the likes of the Woodward Dream Cruise and benefit the entire surrounding Genesee County area. Now in its 11th year, Back to the Bricks has grown to be far more than just a car show and Hatch’s dream has been realized as the event continues this week and next.

“Just a few years ago Professor Mark Perry from U of M-Flint stated that the economic impact of Back to the Bricks was around $50 million. Every year the event seems to get bigger, so if that amount of money is being generated I think everyone can see the importance of an event like this,” Hatch said.

Kicking off the 2015 Back to the Bricks line up of events was the promotional tour on Michigan’s west side in June. Tune Up Party Week is in full swing this week featuring a series of parties taking place in a different Flint-area city every night. A free outdoor concert is set for Friday, Aug. 14 in Grand Blanc. (See more on all of these events in today’s special Back to the Bricks Event Guide). A unique Statues Project that has created bronze statues of automotive innovators from Michigan has also joined the lineup, confirming Back to the Bricks is far more than just a car show. Of course, you can’t forget the main car show set for Saturday, Aug. 15.

Before Back to the Bricks blossomed into what has become an annual series of events, Hatch had to work to get the attention and support he needed.

“Ten years ago when I teamed up with these guys what we wanted to do was make an economic impact on Genesee County … everything we could make free we did,” said Hobson. “Then when our guests come they don’t have to pay us, they can spend money at local businesses. Last year we had around 5,000 people (at the concert alone), this year we are expecting more people.”

In the early days Hatch met with the Flint Convention and Visitors Bureau (FCVB) and the Small Businesses Owners of Downtown Flint (SBODF) and enlisted their support and sponsorship. Then Hatch had to get a permit from the City of Flint to close off at least three blocks of the famed red bricks on downtown Flint’s Saginaw Street.

“There’s even an indirect impact that Back to the Bricks has. During the summer a lot of people spend the dollars they earn in Flint up north, but now people are staying in Flint and spending their money here because so many people want to be in town for the event,” said Hatch. “Back to the Bricks helps keep the doors open on lots of businesses just due to the amount of people brought to town by the event.”

Back to the Bricks’ popularity has grown in numbers with 500,000 people expected to attend the Aug. 15 event in person and online.

“We are third in the nation as far as popularity online for similar events,” said Hatch. “Our website gets hits from every state in the union and hits from all over the world. There is so much revenue generated in so many different way. Even looking at the good will this event brings into the community, there is no equal. Maintaining the momentum and always making the event bigger and better is our main goal, and that’s why we keep working hard.”

For more on Back to the Bricks see the Event Guide inside today’s paper and visit www.backtothebricks.org.