Back to the Bricks expands into Flint Township, Davison 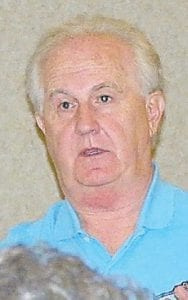 Al Hatch recently spoke to the West Flint Business Association to talk about plans to hold Back to the Bricks events in Flint Township, Davison and other Genesee County communities.

FLINT TWP. — Back to the Bricks, now in its seventh year, has grown so big it needs a Tune-up Party and Flint Township is one of the chosen hosts.

Tune-up Party Week events are also in Clio, Linden/Fenton, Davison and Richfield Township – featuring food, music, door prizes, dancing, car shows, giveaways and more – planned for August 9-13 to bring a taste of the excitement and economic boost of BTTB to surrounding communities, according to Al Hatch, BTTB chairman, who was guest speaker last week at the monthly meeting of the West Flint Business Association.

Hatch talked about what’s in store leading up to this year’s big car and cruise festival in downtown Flint, August 16-20.

The Flint Township Tune-up Party on August 10, with municipal support, begins at 2 p.m. at the Patsy Lou Mega Lot on Linden Road and winds its way down to Duke’s Stereo on Miller Road at 5 p.m., concluding at 7:30 p.m. with door prizes and giveaways of 250 free T-shirts.

Other one-day Tune-up parties begin in Clio on August 9 and will be held in Linden/Fenton on August 11, in Davison on August 12 and in Richfield Township on August 13. Each event has its own array of participating businesses and events and includes a giveaway of 250 T-shirts, Hatch said.

A pilot Tune-up Party in Davison last year was so popular, it’s being expanded, Hatch said.

Hatch also talked about the “Mitten Tour”, a BTTB promotional car cruise that starts June 17 in Flint and for six days will follow a route along Michigan shoreline cities in the Lower Peninsula before returning to Flint June 25 in time for the Sloan Museum Auto Fair.

So far, about 127 cars and 300 people are expected to participate in the 1150 mile shoreline tour.

“It’s a rolling party,” Hatch said of the tour which has 8 overnight stops in Port Huron, Bay City, Alpine, Mackinaw City, Traverse City, Ludington, Holland and Brooklyn and in-between stops in other cities along the way.

Hatch said calls keep coming in from cities asking to be included as a tour stop. He said you don’t have to drive a classic car to participate. Signup forms are available on the BTTB website.

The enthusiasm is a testament to BTTB’s mounting success, he said.

Hatch said he is wary about attaching crowd , participation and dollar estimates to BTTB but quoted Mark Perry, a University of Michigan-Flint economist, who said the event last year had a $50 million impact on the local economy.

Hatch said that owner of Blackstones restaurant in downtown Flint said he served 22,000 meals in one week, making a significant difference in his bottom line.

Also the owner of Trapper Joe’s in Burton said he had to hire extra help and brought in a single mom who earned $600 in tips on her first night.

Hatch said BTTB has gone through 30,000 flyers for the 2011 event and is now working on its third printing. The flyers have been placed at every rest stop statewide, he said.

As for attendance, Hatch estimates 350,000 spectators and 30,000 participants last year but said he isn’t sure how they came by those figures.

BTTB opens this year on August 16 with a showing of the movie “Back To the Future” at the US 23 Drive-in on Fenton Road. Other highlights this year include an appearance by legendary drag racer Don “Big Daddy’ Garlits. He’s bringing his famous ‘Swamp Rat’ dragster and will be selling drag racing memorabilia.

Also Sonny Turner, former lead singer of the Platters will be performing with the Flint Symphony Orchestra at 7 pm. August 19 as part of Music in the Parks.

Diplomat Pharmacy on South Saginaw Street is planning an open house and a “Million Dollar Car Show” of cars valued at over a million dollars including Eva Peron’s Packard, Hatch said.

Also on tap is a chance to sit behind the wheel of a road grader or other construction vehicle as part of a display by Caterpillar Inc., which will be in town during BTTB week for a statewide convention hosted by the Genesee County Road Commission.

Returning for the second year is the annual Corvette Reunion and Car Show on August 20. The first Corvettes were made in Flint so it is only fitting that they return for the biggest car festival in town. Last year over 300 Corvettes came “home” for the first reunion and 800 are expected to be on display this year.

Hatch also said that Chevrolet is celebrating its 100th year this year.

BTTB has no paid staff but gets tremendous support from sponsors, Hatch said.

“Our auto heritage is a tangible asset that has never been exploited,” he said, noting that outside of Detroit, Flint has put more car on the road than any other city in America.

Details about all Back To Brick Events are posted on the organizations website at www.backtothebricks.org.