Back to the Bricks kicks off Heritage Promo Tour 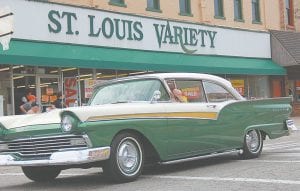 Vehicles participating in the Back to the Bricks Annual Promotional Tour began their 600-mile, six-day trek throughout the lower peninsula in Flint, cruising up through Saint Louis, where they congregated for lunch downtown, then headed for Clare, their first stop, with the help of a police escort.

FLINT — Back to the Bricks has officially kicked off its summertime residency in Flint, beginning with their annual Heritage Promo Tour, which begins in Flint and snakes its way around the lower peninsula, ending in Fenton six days later. The Promo Tour attracted more than 200 vehicles and 400 participants for the nearly 600-mile drive.

All told, Back to the Bricks attracts more than 500,000 car enthusiasts to Genesee County every year, reestablishing Flint as the unofficial automobile mecca of Michigan. Founded by Al Hatch more than 11 years ago, Back to the Bricks has grown substantially, and now includes hundreds of registered vehicles, as well as thousands of spectators and automotive aficionados. The main event, which is a showcase for classic, custom and collectible vehicles of all kinds, takes place August 16-20 of this year, but the extravaganza begins in June, with the Promotional Tour.

This year’s Promo Tour began on June 9 with an excursion from Flint to Clare, and continuing on throughout Michigan. According to the event’s website, “the Promotional Tours are a time of adventure and camaraderie for hundreds of classic car owners. The tours are designed to generate enthusiasm for Back to the Bricks with mini car shows in each locale along the way, and tours of automotive facilities and museums for participants.” 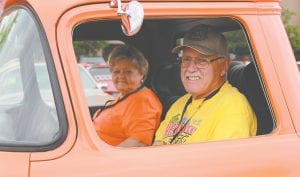 Denny and Brenda Keyworth, of Grand Blanc, driving an orange 1955 Chevy pickup truck, departed from the Insight Institute of Neurosurgery & Neuroscience in Flint, and headed for lunch in Saint Louis, along with hundreds of their friends during the 2017 Back to the Bricks Promo Tour. Photos by Alex Petrie

This year’s Promotional Tour took participants from Flint to Clare on Friday, June 9, then on to Big Rapids, Muskegon, Coldwater, Adrian, and ending up in Fenton on Wednesday, June 14, totaling approximately 580 miles over the six-day period.

Al Hatch, the founder of Back to the Bricks, said fondly, “Who would have thought that seven years ago, when your Back to the Bricks committee came up with the Promo Tour idea, that it would have grown from 25 cars to 200 vehicles, and 400 people? But it has, and that is because of all of you.” 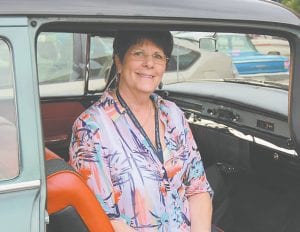 Nancy Earls, of Monroe, posed for a photo before taking off from Flint, sitting in her 1956 Buick Special, which initially belonged to her grandfather. The car, which was featured on this year’s Promo Tour T-shirt, has retained almost all of its original parts.

Rhonda Rau, the event chair for Back to the Bricks, addressed the crowd in Flint on the morning of the departure, stating that “We want every year to be better than the last. Everything we do on the Back to the Bricks committee is for you guys. We listen to what you have to say and we try to make sure we make you guys happy with a great trip every year.”

Though the excursion began with a little bit of rain, the sun emerged by the time the caravan reached Clare, ensuring a smooth ride to help kick off the summer and the Back to the Bricks annual event. Regardless of weather, participants on the are sure to remember their time with friends and family, driving across Michigan during the 2017 Promo Tour.

For more information, visit the event’s website at www.backtothebricks.org. 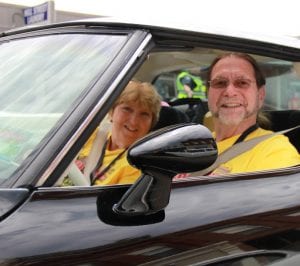 George and Peggy Patten, of Lapeer, made it to Saint Louis safe and sound in their 1979 black Chevrolet Corvette. The Pattens, who are on the board for the annual event, have been attending the event for more than a decade.