Back to the Bricks kicks off Tuesday 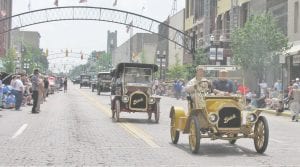 Editor’s Note: View Newspaper Group is proud to be a Media Platinum Sponsor of Back to the Bricks and the official publisher of the Back to the Bricks event guide which can be found in today’s paper. Check out the Event Guide for a full schedule and much, much more. Happy cruisin’!

What started as his dream in 2004 to bring cars back to the red bricks of downtown Flint, has grown to become one of the biggest car shows in the state and even the nation. Back to the Bricks returns for the 12th year Aug. 16 and runs through Aug. 20.

“I feel that Back to the Bricks lead the way to the renaissance (in) downtown Flint,” said Hatch. While he’s cautious to talk numbers, the event is said to bring more than 500,000 people and more than 40,000 cars to downtown Flint and surrounding Genesee County areas throughout its five-day run. 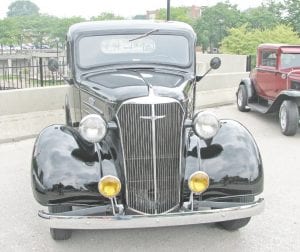 “Whatever the number is, it’s large,” said Hatch. And the impact expands far beyond the five-day portion thanks to spin off events like the Promotional Tour and the Tune Up parties that have grown out of the event’s popularity. A few years back, Professor Mark Perry from The University of Michigan-Flint stated that the eco- nomic impact of Back to the Bricks was around $50 million.

“They’re staying here, they’re buying gas,” said Hatch. “They say for every dollar (that enters) a community it rolls over seven times.”

Getting the dream started with Hatch was fellow car and Flint enthusiasts including Dave Wood, event chairman. He and Hatch met while rehabbing bad knees years back and began talking about how great a car show of this caliber would be for Flint’s reputation.

“It’s just exciting” said Wood of the event’s success. “I like to see all of the people downtown.” It doesn’t hurt that like Hatch, Wood is a car lover. “I love the cars too,” He said. He and his wife Mary Wood, who also volunteers with the event, both drive classic cars. Him a 1968 GMC short box pick up and her a 1972 Buick Skylark convertible. 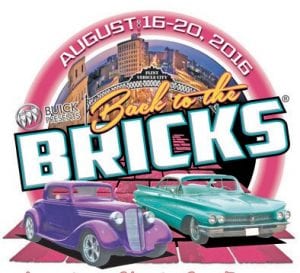 The Back to the Bricks fun started off this year with the Promo Tour on June 10. The excursion went from Flint to Ypsilanti, and continued on throughout Michigan to Port Huron, East Tawas, Grayling, West Branch and ended up in Birch Run on Wednesday, June 15, totaling approximately 623 miles over the five-day period.

The Back to the Bricks Tune Up Parties continue this week with events still set for Fenton, Davison and Mt. Morris. The free parties began on Monday Aug. 8 in Flint Township and made stops in different cities each day.

The Back to the Bricks main event gets underway Tuesday, Aug. 16 with family-friendly fun at the US 23 Drive In on Fenton Road in Mundy Township. It continues with rolling cruises, a free concert at the IINN property, 4800 Saginaw St. on Friday, Aug. 19 featuring the Motortown All- Stars, a Motown review and much more.

Saturday, Aug. 20 kicks off with an opening ceremony at 10 a.m. on Saginaw Street. Hatch said it can’t be missed, and will feature a vintage war plane flyover and a special presentation to honor World War II veterans.

Wood said he and other organizers are also looking forward to the opportunity to teach others about cars and car rehab. “We’re really pushing for the Hot Rod High,” he said, adding that a lot of companies and colleges including Baker and Kettering will be on site to talk about their automotive training programs. Participants can attend seminars and workshops and learn more about building and tinkering with cool cars and hot rods. The hope is to attract the next generation of car enthusiasts. Hot Rod High takes place on Saturday, Aug. 20 in the Flat Lot in downtown Flint. Other events on Saturday include a swap meet, Corvette reunion, Buicks on the Bricks and more.

On top of the economic impact, Hatch said that Back to the Bricks helps to bring positivity to the city of Flint. “People are coming. They look forward to it,” he said. “It’s become very, very significant.”

Check out today’s special section for information on all of these special events and much more. Check out www.backtothebricks.org for updates and plans as they begin for the 2017 event.