Back to the Bricks kicks off with Promo Tour 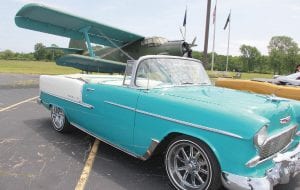 A Chevy Bel Air parked in front of a WWII-era plane at the Yankee Air Museum in Van Buren on Friday, June 10, the first day of the Promotional Friendship Tour.

Editor’s note: View Newspaper Group is proud to be a Media Platinum Sponsor of Back to the Bricks and the official publisher of the Back to the Bricks event guide which will arrive as part of our Aug. 11 editions. Below is the first in a series of feature stories surrounding the event.

FLINT — Men ogled and whistled as the cars lined up and poured out of the parking lot.

“I’d trade my wife for that Bel Air,” one said to another.

The women at the event followed suit, cheering and hollering as engines revved and tires shrieked.

Maybe it’s the guttural noises coming from the engines. Or the fumes spilling from the mufflers.

But the throngs of men and women, (most of whom are indisputably beyond middle aged), gleefully reverted to the antics and excitement of teenagers celebrating their last day of school.

Back to the Bricks has a tendency to bring out the inner teenager in its participants. That’s just part of the magic. The annual event attracts more than 500,000 car enthusiasts to Genesee County every year, reestablishing Flint as the unofficial automobile mecca of Michigan. 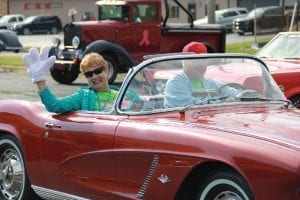 Janet and Jerry Koryciak, of Davison, enjoyed their sixth Back to the Bricks event, waving to their fellow automobile enthusiasts from their 1962 Corvette, painted in its distinct “Honduras Maroon.”

Founded by Al Hatch more than 10 years ago, Back to the Bricks has grown substantially, and now includes hundreds of registered vehicles, as well as thousands of spectators and automotive aficionados.

The main event, which is a showcase for classic, custom and collectible vehicles of all kinds, takes place Aug. 16-20 of this year, but the extravaganza begins in June, with the Promotional Tour.

This year’s Promo Tour began on June 10, with an excursion from Flint to Ypsilanti, and continuing on throughout Michigan. According to the event’s website, “the Promotional Tours are a time of adventure and camaraderie for hundreds of classic car owners. The tours are designed to generate enthusiasm for Back to the Bricks with mini car shows in each locale along the way, and tours of automotive facilities and museums for participants.” 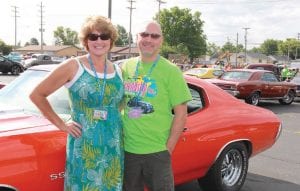 Jeff and Margaret Kato, of Flushing, have brought their 1972 Chevelle to Back to the Bricks every year since its inception, when the tour was by invitation only and took participants from Michigan to New York.

This year’s Promotional Tour, entitled the Friendship Tour, took participants from Flint to Ypsilanti on Friday, June 10, then on to Port Huron, East Tawas, Grayling, West Branch and ended up in Birch Run on Wednesday, June 15, totaling approximately 623 miles over the five-day period.

Al Hatch, the founder of Back to the Bricks, said fondly, “Who would have thought that seven years ago, when your Back to the Bricks committee came up with the Promo Tour idea, that it would have grown from 25 cars to now approaching 200 vehicles, and nearly 400 people? But it has, and that is because of all of you.”

Jeff and Margaret Kato, of Flushing, have been attending the event since it began, and were among the very few to have been included in the first year’s invite-only tour, which took participants all the way to New York. Jeff and Margaret were thrilled to be involved in the event again this year, driving their brilliant orange 1972 Chevelle, (with their stuffed tiger in the back seat). 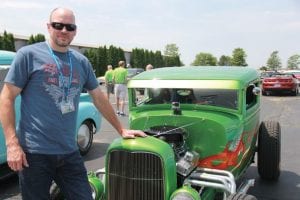 John McKeown, of Waterford, proudly displays his 1930 fenderless Ford Model A. This year’s event is McKeown’s second time attending Back to the Bricks. When asked if he’ll be returning next year, McKeown was resolute, stating, “Oh yeah. I’ll definitely be back.”

Mary Sue Young, of Flint, Sue Kelsey, of Grand Blanc, and Karen Borton, of Flint, are a trio that’s impossible to miss, carpooling their 1935 Chevy Cabriolet and 1969 Buick Skylark convertible, both of which are painted a spectacular shade of pink in honor of breast cancer awareness. Borton’s Skylark is also decorated with dozens of autographs and signatures from past tours and events, some of which include Kid Rock, Chip Foose from TV’s “Overhaulin’’ and Shirley Muldowney, the “first lady of drag racing.” The three women have become fixtures at the event and thoroughly enjoy the fellowship that Back to the Bricks provides to its participants, as well as the exposure afforded to their noble cause.

Rhonda Rau, the event chair for Back to the Bricks, addressed the crowd in Flint, stating that “We want every year to be better than the last.”

“Drive safe and enjoy the tour around our wonderful state, and keep in mind that our visits bring a positive economic impact to each community. So be sure to support the local business owners by purchasing a souvenir and you’ll have a keepsake to remember the wonderful time you had with all of your friends this year.”

Whether the participants collected souvenirs from local businesses or not, they’re sure to remember their time with friends and family, driving across Michigan during the 2016 Friendship Tour.

For more information, visit the event’s website at www.backtothebricks.org.