Back to the Bricks names first executive director 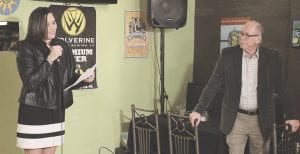 Amber Taylor, left, the new executive director of Back to the Bricks, is introduced by Steve Hobson, chairman of the Board of Director for Back to the Bricks, during a press conference Tuesday at the 501 Bar & Grille in downtown Flint. Photo by Gary Gould

FLINT — Back to the Bricks has its first-ever executive director and she said she hopes to carry on the annual classic car event into its 16th year and on to the future.

Chairman of the Board Steve Hobson announced Tuesday the hiring of Amber Taylor who will serve as the organization’s first executive director.

“Fifteen years ago, we started down here, in downtown Flint, with 600 cars,” said Hobson, during a Jan. 7 press conference at the 501 Bar & Grill in Flint. “Now, 15 years later, we are a yearround event. We do the Chrome and Ice show, which is coming up one month from today, Feb. 7, we do the promotional tours, the tune up parties and our main event. It’s a year-round program.”

But Hobson said the Board of Directors decided it doesn’t have the energy or strength to go any further to expand on Back to the Bricks, though there are many new ideas. The decision was made to expand the event and hire someone to help out with the board’s vision.

“We did some research and decided to hire an executive director,” said Hobson. “After about two months of looking, making sure we had the right person, we came up with our new Back to the Bricks executive director, Amber Taylor.”

Taylor, who has worked in marketing and advertising and construction the past five years, has been involved with other local nonprofit groups including the Flint Women’s Forum, Whaley Children’s Center and the Hurley Foundation with various events.

This is not Taylor’s first time working with Back to the Bricks. Through the efforts of the Flint Women’s Forum (FWF), in its partnership with the Automotive Heritage Committee of Back to the Bricks, she acted as a model last year for a statue that is in the works of the famous World War II icon, Rosie the Riveter.

When completed, the statue will be displayed at Bishop International Airport.

She said becoming the executive director of Back to the Bricks is an amazing opportunity and a job she knew she wanted when she first heard rumblings about it in the community.

“Being a certified tourism ambassador, I know much about the power of tourism and events in this community,” said Taylor. “I knew I needed to get involved in this particular style of event. I’m more excited about learning from these guys – they have it all in their heads. They’ve done this for 15 years now. I’ve got the computer and technical parts, the marketing and advertising background. But I want to learn what they know, how they’ve run this thing seamlessly like clockwork year after year.”

Taylor added she wants to make Back to the Bricks appeal not to the car buffs who are in their 70s and 80s, but to younger generations so the event remains popular and can continue.

“We really want to give the praise to Al Hatch who brought this event to the community,” she said of the founder of Back to the Bricks. “We don’t want to let this go and let his legacy go.”