BACK TO THE BRICKS PROMO TOUR 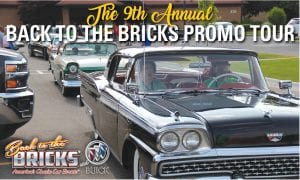 Back to the Bricks began their annual Promo Tour last Friday in Davison, with hundreds of participants showing up for the six-day tour, which left Davison on June 8 and had overnight stops in Mt. Pleasant, Gaylord, Petoskey, St. Ignace, and East Tawas.

With the arrival of summer, cruise season is officially here. It’s time to get those collector cars out of storage and ready for a summer of fun. The 9th Annual Back to the Bricks Promo Tour kicked off on June 8 and organizers were pleased to announce a record number of vehicles and participants this year, including nearly 100 cruisers who joined the tour for the first time.

Each June the Back to the Bricks Annual Promo Tour provides an opportunity of adventure and camaraderie for hundreds of classic car owners. The six-day tour is designed to do two things: promote all Back to the Bricks (BttB) events and showcase each participating city’s unique features, fostering economic development.

This year’s Promo Tour, entitled “Mighty Mac & Back” took place from June 8-13, with overnight stops in Mt. Pleasant, Gaylord, Petoskey, St. Ignace, and East Tawas, and culminated with an “End of the Road” luncheon at the Birch Run Speedway & Event Center. 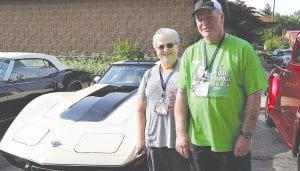 Above: Bob and Sue Gerds, of Millington, posed for a photo in front of their 1978 Corvette before heading out on the “Mighty Mac and Back” Promo Tour, which will wind through the lower peninsula up to St. Ignace.

As part of the Promo Tour, there was an 80s theme on June 9 in Gaylord, with prizes for the best costumes, and a poodle skirt contest in East Tawas on June 12, so guests were encouraged to pack accordingly and bring out their best costumes and gear.

Founded by Al Hatch more than 10 years ago, Back to the Bricks has grown substantially, and now includes hundreds of registered vehicles, as well as thousands of spectators and automotive aficionados. The main event, which is a showcase for classic, custom and collectible vehicles of all kinds, takes place August 14-18 of this year, but the extravaganza officially began with the Promo Tour. 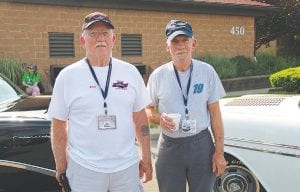 Left: Brothers Ken and Bruce Dunton have been part of Back to the Bricks since its inception, taking part in the annual Promo Tour. Ken, of Caro, brought out his 1956 Chevy 210, while Bruce drove his 1956 Bel Air.

From left, Barbara Worden, Gayle Mayer, Mary Ann Voorhies and Erna Hogan donned matching hats in honor of the annual Back to the Bricks Promo Tour. 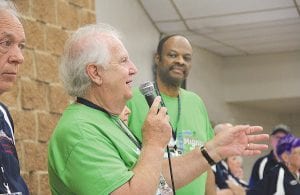 Al Hatch, the founder of Back to the Bricks, welcomed hundreds of classic car enthusiasts to St. John Catholic Church in Davison on Friday, offering breakfast and instructions before the six-day Promo Tour.