Back to the Bricks Road Rally raises thousands for food bank 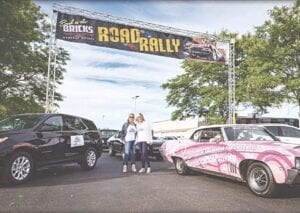 Shea Automotive Group team members Amanda Felker and Stacy Shea Fields get ready to kick off the Back to the Bricks Road Rally. Photo by Dennis Freeman

FLINT TWP. — Looking for an event to bring car enthusiasts together in a safe way, Back to the Bricks organizers hosted their first-ever road rally on Saturday, June 13.

“We knew our car lovers needed something to do,” said Back to the Bricks Executive Director Amber Taylor.

Organizers also knew, however, it had to be something that could be done safely because of the COVID-19 pandemic. The idea for a road rally was born and planning got underway.

“It rolled together so quickly,” said Taylor. She and her team announced the event and it sold out quickly with 375 cars registered.

The cost was $10 a car with all proceeds set to go to the Food Bank of Eastern Michigan.

Back to the Bricks sponsor Shea Automotive Group was approached by organizers to see if they would host the early-morning kick off.

“It was amazing to see all of the cars,” said Stacy Shea Fields, owner of Shea Automotive Group. Wearing masks and keeping a safe distance, the Shea team helped to distribute goodie bags to attendees and collect additional funds for the food bank. Serving as the grand marshal for the event, Fields welcomed attendees and sent them on their way once the rally got started. 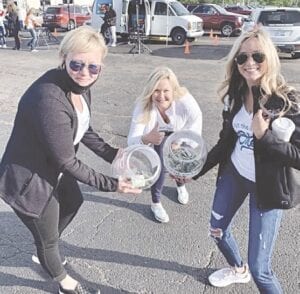 “We’re proud to be part of the automotive industry,” said Fields. “It’s time for the community to get back into the race, and we want to be a part of it.”

Participants in the road rally, who were asked to stay near or in their car during the kick-off, were not given the route until the day of the event. Taylor said everyone received a sealed envelope with the route and scavenger hunt clues. The 123-mile route took drivers on a scenic tour of Michigan.

“There’s so much to see in all of these little cities,” said Taylor.

The event a was huge success with many people asking, “When’s the next one?” said Taylor.

“We saw so many smiling face,” she added. “Everybody was so excited.” 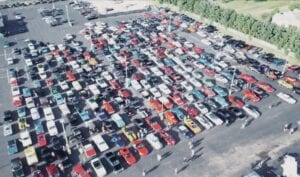 More than 300 cars arrived at Shea Automotive Group to kick off the first-ever Back to the Bricks Road Rally. Photo by Mike Smith/ Aerotech Photography

Best of all, the event raised over $5,000 for the Food Bank of Eastern Michigan. 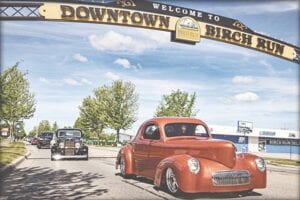 The first-ever Back to the Bricks Road Rally took participants on a 123-mile journey throughout Michigan. Photo by Dennis Freeman