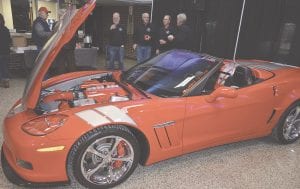 Chrome & Ice, a classic winter car show presented by Back to the Bricks, will be returning to the Dort Federal Credit Union Event Center on Feb. 7, 8 and 9. More than 125 cars will be on display during the three-day event, filling both of the Dort Federal Event Center’s arenas, as well as its mezzanine and lobby areas.

At a press conference held last Thursday, Back to the Bricks organizers revealed that the 2020 Chrome & Ice show will highlight a special Corvette exhibit in the lobby of the Dort Federal Event Center. Steve Hobson, Chairman of the Board for Back to the Bricks, said that the display will celebrate Flint’s role as the birthplace of the Corvette in 1953 and feature a car from each of the model’s eight generations.

The exhibit will also include a 2020 Chevrolet Corvette Stingray, the first midengine Corvette made by General Motors in the model’s history.

Another new attraction coming to Chrome & Ice is Rat Alley, a special section for Rat Rods that will be displayed under the seating area in the Dort Federal Event Center’s main arena.

Chrome & Ice will also host live concerts headlined by Third Degree Burns and country western performer Dave Lagness. Other attractions include the VIP Experience from 6 p.m. to 8 p.m. on Feb. 7 and the Top 25 Best of Show awards to wrap up the show on Feb. 9.

Hobson, the Chairman for Chrome & Ice, said that the event presents a great opportunity for classic car owners to show off their vehicles in spite of the Michigan winter season.

“It’s a wonderful economic impact in the Genesee County area,” he said. “We’re just happy to be able to put it on and have something in the winter for car guys to do.”

Hobson said that shows like Chrome & Ice are also ideal for car owners, who can display their vehicles in a controlled environment with great lighting and no weather-related impact.

“If you’ve never entered your car into an indoor car show…it’s better than what you would think,” he said. “You don’t get a sunburn, you’re not getting rained on and it’s not windy. It’s amazing.”