Back to the Bricks week

A history of Flint Assembly highlights dating back to the 1940s was one of several displays during an Open House tour on Tuesday to kick off Back to the Bricks.

FLINT — Long lines snaked around the north parking lot at Flint Assembly, 3100 Van Slyke Road, as thousands lined up to board shuttle buses for an Open House and tour of the plant during a GM-sponsored kick-off of the annual Back to the Bricks classic car show.

Besides getting a chance to see how vehicles are made from start to finish, about 1,500 visitors toured several displays inside the plant including a historic timeline of Flint Assembly operations, a die making demonstration, update on the restoration of the original GM building in downtown Flint and other educational information.

The parking lot held a variety of activities ranging from a photo op with a real Heisman Trophy courtesy of AFLAC, dog races by the Flint Assembly-sponsored Pawbusters Flyball Team, free test drives or rides in new GM vehicles, freebies, refreshments and much more.

During an opening press conference, Chris Hornberger, national sales promotions manager for Buick, said that the car’s industry’s present and future would not have been possible without the part Buick has played. 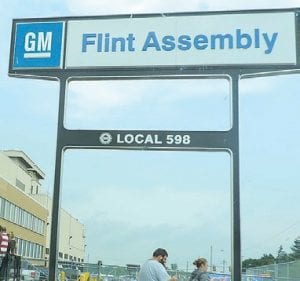 “Buick is proud to return to the birthplace of GM as a presenting sponsor,’’ he said.

Al Hatch, founder of Back to the Bricks, gave a brief history of how the event has grown from a roundtable discussion among a handful of friends to one of the “Top 20 auto venues” in the nation. 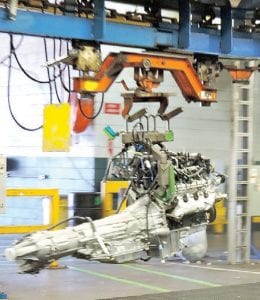 Above, giant engines being conveyed to assembly areas were part of the sights during a Flint Assembly plant tour to kick off the 10th annual Back To The Bricks classic car show. 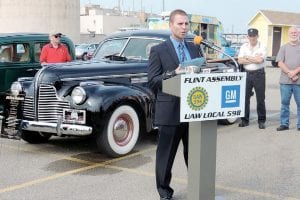 During a press conference to kick off Back to the Bricks, Chris Hornberger, Buick national sales promo manager, was one of several speakers flanked by a one-of-kind Buick Roadmaster Sport Coupe converted into a pick-up – one of only four built then scrapped during World War II, according to a history provided. Buick is the presenting sponsor of this year’s Back to the Bricks event.