Car cruise is back with new locations and more events 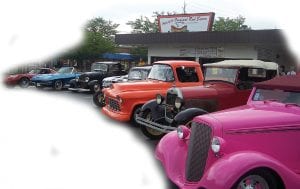 Classic cars line up outside the Hot Dog Stand Monday morning in Grand Blanc. The cars will be part of the upcoming Back to the Bricks event taking place across Genesee County starting Friday in Davison.

GENESEE COUNTY
— The sound of roaring engines will once again fill the air next week as the Back to the Bricks event returns for its sixth year with new locations and events for participants and visitors alike.

The first “Tune-up for Back to the Bricks” event will take place Friday with a Twilight Cruise at 8 p.m. in the parking lot at John’s Pizzeria, 9010 Davison Rd. Participants are encouraged to pick up one of 250 cards for a free T-shirt at Graff Chevrolet, 800 N. State Rd. in Davison, where door prizes will be given out during the day. Cruisers can then head to the Davison Downtown Cruise around 5 p.m. At the Back to the Bricks memorabilia table they can get their card punched to receive a free T-shirt and enter a $100 drawing later in the evening at John’s. Registration is not required.

Dennis Hayworth, an organizer for Back to the Bricks, said the first official event of the week is “Bricks Flicks!” starting 5 p.m. Tuesday at the US 23 Drive-In Movie Theater, 5200 Fenton Rd., with a showing of “The World’s Fastest Indian.” The event, as all events during the week, are free of charge. Six-hundred spots during the evening are reserved for collector cars, while 600 are open for the general public. Indian motorcycles will be on display during the evening, as well as race cars, music courtesy of DJ Bob Steel and concessions for sale. 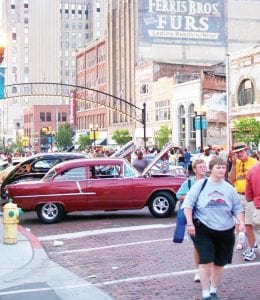 A look at downtown Flint during the 2009 Back to the Bricks.

“The drive-in is open to everybody,” Hayworth said. “Anybody that comes bring your family and bring the lawn chairs.” He thanked Steve Hopson and Steve Casner for their help in organizing the movie event, as well as Johnny Thomas Enterprises for “donating the time and the facility.”

Bob Evans Restaurant will hold a “Family Fun Night” from 5-7 p.m. Tuesday at its Burton location, 1700 S. Center Rd. The event, being put on in conjunction with the Trend Setta Corvette Club, will have proceeds go to Alternatives for Children, a non-profit organization in Flint designed to help children while they find out-of-home placement.

The “Rolling Cruise” events will return from 5-10 p.m. Wednesday and Thursday evening, with 33 host sites along the way starting from St. Christopher Episcopal Church, 9200 S. Saginaw Rd., in Grand Blanc, into downtown Flint. The KIX Band will perform from 6-10 p.m. on the main stage in downtown Flint.

A highlight of the Rolling Cruise is appearances

by movie stars Cindy Williams and Paul Lamont of American Graffiti
at The Hot Dog Stand during Wednesday’s Rolling Cruise. Williams and Lamont also will be in downtown Flint Aug. 20-21.

Two “mega sites,” including music, food/drink, attractions, restrooms and information will be located at the Grand Mall in Grand Blanc and the IINN/Hurley/Diplomat Specialty area on the corner of Atherton and Hemphill roads.

On Thursday, the Grand Blanc Mall site will hold Century 21 Sabo Associates first Bike contest. Registration for the contest featuring two categories — classic and sport bikes — will take place from 4-7 p.m., with the winners announced at 8 p.m. Prizes will include a $100 gift certificate to Vehicle City Harley-Davidson in Flint.

Friday’s events include a free pancake breakfast form 7-10 a.m. in the University of Michigan-Flint parking lot, while the Annual Kick- Off party featuring free hot dogs, popcorn and water for all cruisers will take place from 11 a.m. to 3 p.m. at Duke’s Car Stereo, 2833 S. Dort Hwy.

A Friday Night Cruise-In will feature Scruffy Dog on the downtown main stage from 4:30-6:30 p.m.; the Flint Symphony Orchestra performing the rock and roll concert Flash Cadillac from 7-8:30 p.m. on the Saginaw Street stage; and the Fairlanes from 8:30-10 p.m. on the downtown main stage. Shirley Muldowney, known as the “First Lady of Drag Racing,” will be signing autographs Friday evening from 5-10 p.m. at the center lot in downtown Flint.

Saturday will feature entertainment all day long, with a free NSRA safety inspection; Women’s Marketplace from 9 a.m. to 5 p.m. at the University Pavilion, 303 S. Saginaw St., featuring 30 vendors selling purses, jewelry, sunglasses, Tupperware, Pampered Chef and other items; a fire truck round-up; dragster blasts at 10 a.m., 2 p.m. and 4 p.m. at the downtown flat lot;’ door prizes; and Kids Flix, featuring the movie “CARS,” at 2 p.m. on the University of Michigan-Flint campus. Musical performances on the day include main stage acts DJ Bob Steel from 8-11 a.m., 1-5 p.m., and 7-8 p.m.; Blue Hawaiians from 11 a.m to 1 p.m.; and the Radio Flyers from 5- 7 p.m. Cal Roberts & Wayne will perform from 1:30-4:30 p.m. at McFarlan Park, while J.D. Winegarden, Jr. will play from 2- 4:30 p.m. at Saginaw and Third streets.

Hayworth said 25,000 cars and 250,000 spectators came to last year’s event. He said the numbers have doubled each year since the event began.

“And if history repeats itself, we will double again. It scares me,” Hayworth laughed. “We literally fill up all the motels and hotels in the county.”

A site map for all the host locations, offerings and full event schedule is available online at www.backtothebricks.org.