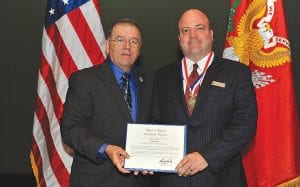 The benefactor medal and certificate that was awarded during a special induction ceremony held at the National Guard Museum in Washington, D.C., signifies and honors Baker College’s permanent membership into the Legion de Lafayette of the National Guard.

The Foundation’s mission is to engage in educational programming that honors the service of its citizen soldiers and airmen.

“Our support of the Guard, especially in Michigan, is evidenced by our induction into this organization,” said Shawn Mann, Baker College director of military education programs. “As Guard members are increasingly forward deployed and pressed into service for our country, Baker College remains an institution dedicated to guaranteeing that its men and women don’t need to also sacrifice their educational goals and aspirations while they serve. We are very pleased to be recognized for our efforts.”

Since its inception in 1988, the Legion de Lafayette has been awarded annually to individuals, corporations and National Guard organizations for either extraordinary service to the Historical Society of the Militia and National Guard or a minimum financial contribution of $10,000.

The Legion de Lafayette is named to commemorate the long-standing historic relationship between the distinguished French soldier, the Marquis de Lafayette, and the American Minutemen.

Inductees into the Legion de Lafayette are presented with a medal similar to the special regimental presentation medal commissioned by the Seventh Regiment for presentation to the Marquis de Lafayette in 1832. — G.G.