Baker president and CEO named to McLaren board 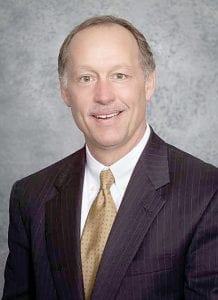 FLINT — F. James Cummins, president and chief executive officer of the Baker College System, has been named to the McLaren Regional Medical Center board of trustees.

“Jim’s extensive knowledge in both non-profit administration and corporate finance is a great asset to McLaren Regional Medical Center as we continually address the challenges of a rapidly changing health care environment,” said Kristen Skivington, McLaren Regional Medical Center board of trustees chairman. “We are pleased that he has agreed to share his expertise and wisdom.”

Cummins, a Grand Blanc resident, was named CEO of the Baker College System in June 2002, after being vice president for finance at Baker for 16 years. Prior to his 25 years with Baker College, he was a Certified Public Accountant at Milhouse and Holaly.

Cummins holds a bachelor’s degree from Western Michigan University. He is currently a member of the board of trustees for The Community Foundation of Greater Flint, serves as treasurer for the Flint Institute of Arts board of trustees, and sits on the executive committee of the Association of Independent Colleges and Universities of Michigan.