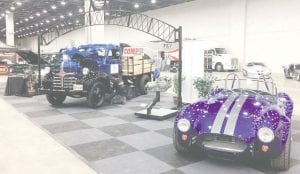 The 1974 Ford Bronco, 1941 Dodge truck and 427 Cobra “kit” car on display at the Baker College booth for Detroit AutoRama are shining examples of work by students in the college’s automotive programs.

FLINT TWP. — When the lights turned on at Cobo Center recently for the opening of Detroit AutoRama 2017, the three vehicles renovated or built by Baker College students shown brightly – inside and out.

“There’s no better way to communicate the quality of Baker College’s training than to show it,” said Mark Heaton, with Baker College admissions. “The lights in the exhibition area are not forgiving, but the vehicles that our students renovated and built are so shiny and perfect, they look new and are extremely impressive.”

The vehicles on display at the Baker College booth were a 1941 Dodge truck, a 1974 Ford Bronco and a 427 Cobra “kit” car. The Bronco entered into the competition for its class.

Another piece of student workmanship loomed over the display area. The large metal archway was created by students in Baker College’s welding program

Baker College is one of three Michigan colleges certified for both “collision repair/refinish” and “automotive” by the National Automotive Technicians Education Foundation (NATEF). — G.G.