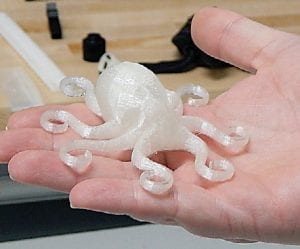 Close up view of a finished plastic octopus model created in a MakerBot Replicator 3D Desktop Printer in the Materials Lab at Baker College-Flint.

FLINT TWP. — Robots came to life, computers whirred, lasers flashed and metal and plastic molders cranked out parts when the technology labs were powered up last Thursday for an open house at the Center for Engineering and Computer Technology at Baker College- Flint.

Parents and students interested in technical job training got a guided tour of nine specialty laboratories equipped with machinery used in real-world industry.

“We have something for everybody who is interested in the technical side of things,” Sala said. 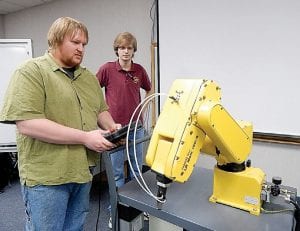 Eric Rix (left) and Alex White, third-year engineering students and members of the Baker College of Flint chapter of the American Society of Mechanical Engineers demonstrate a FANUC robot in the Robotics Lab during an Open House last week. The FANUC robot is a small-scale version of those used in automotive assembly plants.

Seven of those labs are the same ones used by several Carman-Ainsworth High School students last summer who earned college credits as part of the Accelerated Graduation Opportunity (AGO program).

The C-A students worked directly with Sala and other professors and instructors at Baker.

In the Material Lab they worked with instructor Tom Spendlove who said they built a bridge and tested it for strength. The Materials Lab is equipped with industry-grade computer-assisted machinery that makes plastic parts to order.

Spendlove showed a model of a plastic hand commissioned by a company that needed to make a prosthetic (artificial limb).

“If companies have ideas they want to develop, we would be happy to develop those with our students, to have projects that are meaningful,” Spendlove said. It is always best if they do stuff that is actually in the industry instead of having us teachers just making up stuff for them.” 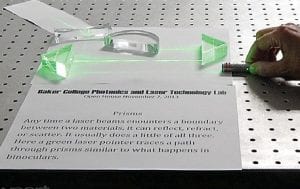 During the open house, White had the CNC churning out a Turner’s cube which when done correctly is a standard test of students ability.

Jim Troup, who runs the Manufacturing Lab, works often with high school robotics students. A group from Flushing High School were at the open house to show off a robot created in the Baker lab.

Sala noted the jobs potential of the year-old Photonics Lab which is partly supported by a grant from the National Science Foundation Advanced Technological Education program. Graduates of the two-year program will find plentiful jobs as laser technicians, she said.

About 300 students expected to graduate in the field this year will fill only onethird of projected openings, according to the National Center for Optics and Photonics Education. That worker shortage is expected to continue until at least 2017.