Band honors fond beginnings in Flint with string of shows 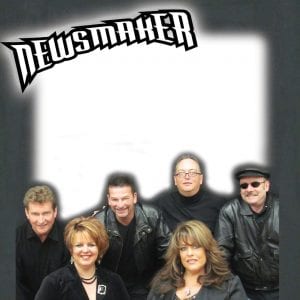 BURTON — Founded during the heart of the ‘70s rock era in Flint, a town once renowned for rock ‘n’ roll innovations, bluesy licks, and plethora of suitable venues, the band Newsmaker — unlike the city’s music culture — has withstood the test of time.

Newsmaker, headlining weekend gigs at Nightingale through mid-April, is turning 30 next year.

“We’re stronger than ever,” says Perry Joseph, the drummer/ vocalist/founder /manager of Newsmaker, who promises the anniversary celebration

of the band will be held in Flint and Genesee County.

And the show will feature Newsmaker’s original lineup.

“The opportunity presented itself to have them return,” said Joseph, who adds the band is “concert level” now.

“We’re a friggin’ powerhouse,” he said.

For about a dozen years, Newsmaker has been on hiatus from Flint. They’ve toured the Midwest, dealt with customs for Canadian shows and, more recently, have been spotted in northern Michigan, playing The Grand Hotel as well as the Detroit Opera House.

Over the years, the band has expanded their song catalog for weddings and corporate events. Songs from Frank Sinatra and Nat King Cole can be found on the same setlist as selections from Lady Gaga and The Black Eyed Peas. Joseph said it’s old hat now to be able to read a crowd and call out a song that’ll get the dance floor at capacity.

Since all six members trade lead vocals, Newsmaker can cover a range of musical stylings. To fill out a themed night of a particular genre, the band will sometimes use a horn section and conga drums.

“Our mainstay is performing covers,” said Joseph. “Our strength is that we’re able to perform for the people and not so much ourselves. After all, our energy comes from them.”

Hardly any member misses a performance.

“I’m kind of old school with the way I run Newsmaker,” Joseph admits. “There’s not much calling in sick.”

That seriousness has carried over from the band’s inception in 1982, when they were regulars at Network, Benjamin’s and Nightingale.

It’s fitting then that the original band will reprise gigs in one of their first clubs.

“I was actually approaching people looking for places when Nightingale told me that they would reopen to have us back,” said Joseph. “It seems like everytime we come back, it’s a huge deal.”

The club portion of Nightingale had been closed since January.

Now, Saturdays and Sundays summon a crowd of fans, some that first attended a Newsmaker concert 30 years ago.

“It makes you feel good that the people want to come out and see you,” remarked Joseph. “They’re the same except that their hair’s a little grayer. I wouldn’t have traded it for nothing.”