Bands, horses and more turn out for C-A HOMECOMING PARADE 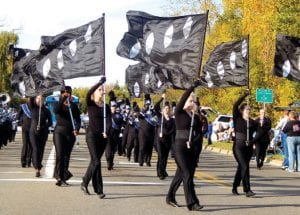 FLINT TWP. — It was a banner week of celebration for Carman-Ainsworth Schools capped off by the annual Homecoming Parade on Van Slyke and Maple roads.

Riders on horseback and appearances by Miss Michigan Princess scholarship pageant winners were among parade highlights. Township fire and police vehicles also made their annual appearance.

YouthQuest and robotics clubs were parade entries made up mostly of school groups but several township businesses also participated including bd’s Mongolian barbecue.

Superintendent Steve Tunnicliff and other school administrators were among those walking in the parade and passing out candy.

A homecoming King and Queen, chosen from seniors, rode in the parade and were crowned during half-time at the football game which C-A won. They were attended by a court of princes and princesses selected from lower grades, who also rode in the parade. 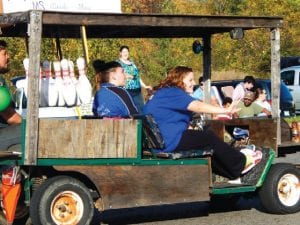 A bowling club had a humorous parade entry completed by two leashed bowling balls rolling behind the vehicle. 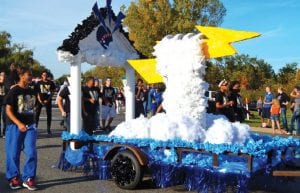 The senior class float entry depicted the fist of Zeus, Father of the Gods in Greek Mythology, protruding from a cloud and holding a thunderbolt in keeping with this year’s Mt. Olympus theme. The freshmen float featured Apollo, the God of Music sophomores depicted Ares, the God of War and, juniors featured Poseidon, God of the Sea. Party at the Parthenon was the theme of the Homecoming Dance. 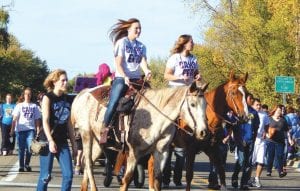 Left, members of the high school’s Empathy for All (EFA), an antibullying group, rode on horseback. Right, the Freshman class float pre-game prediction turned out to be more than wishful thinking as the Cavaliers went on to win a revenge match 28- 10 over Flint Powers Catholic High School. 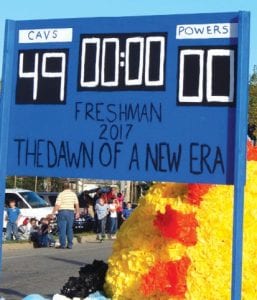