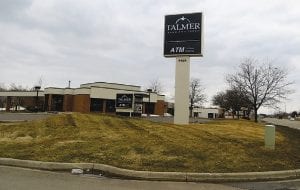 Left, Talmer Bank’s distinctive black signs have replaced the old red and white ones at the former First Place Bank on Miller Road.

FLINT TWP. — The face of banking along Miller Road is changing.

Ohio-based FirstMerit Bank has announced plans to close three branches in Genesee County including one at 3023 Miller Road and Ballenger Highway, which has been there as long as many people can remember.

Township tax records date the Miller Road building back to 1960, making it 50-plus years old, according to Tracey Tucker, director of the building department. Local history of Citizens Bank dates back to the late 1800s.

The Miller Road branch is slated to close in early June. FirstMerit reportedly will continue to operate 17 locations in Genesee County including one in Flint Township at 1373 S. Linden Road at Court Street.

Below, FirstMerit changed signs at Citizens Bank last year but is now planning to close this branch at Miller Road and Ballenger Highway.

Established in August 2007, Talmer Bancorp is currently the third largest bank headquartered in Michigan, according to its web site. It operates 94 branch offices and 11 lending offices located primarily in the Midwest. Other branches in Genesee County are located in Davison, Flushing and Flint and there also is a loan office in Grand Blanc.

At the time of the change in ownership, Warren-Ohio-based First Place bank operated 43 branches in Ohio and Michigan, according to financial filings. As of Sept. 2012, First Place had total assets of $2.6 billion and total deposits of $2.1 billion.

The bank’s new name is a combination of Talmage and Merzon, who were the grandfathers of David T. Provost, chairman and CEO of Talmer Bank and Trust and Gary Torgow, chairman of Talmer Bancorp, Inc.