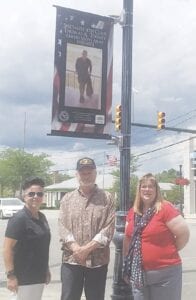 On a lamppost on the southwest corner of Saginaw Street and Grand Blanc Road is a banner with Toohey’s picture, and a little information about his service to his country.

“It felt good,” said Toohey, who served in the Vietnam War. “We didn’t get a homecoming at all. This feels like (a homecoming).”

The banner is one of 220 that eventually will line Saginaw Street, Grand Boulevard and Physicians Park.

Sault Ste. Marie-based History of Hometown Heroes is working with the City of Grand Blanc and local veterans’ organizations to coordinate the banner project.

The 2-foot by 4-foot vinyl banners cost $500 each, and a portion of proceeds benefit veterans’ programs, said Abby Baker, president of History of Hometown Heroes.

Each banner will be in place for two years, after which time the veterans or their family members who purchased the banners may claim them.

Baker said the banners not only honor veterans from the City of Grand Blanc, they also add another visual element and a walking tour to the downtown.

History of Hometown Heroes also offers an app that will allow folks to scan a QR code on the lampposts to hear more of the veterans’ stories than could fit on the banners.

“This is an opportunity to really get to know some of these individuals,” Jean-Buhrer said. “Knowing the connection, knowing the person beyond the face on the banner, seeing they were real people … it’s like going to a museum and seeing the inspiration behind the artwork. Hearing a unique side to their stories is part of what we’re bringing to Grand Blanc.”

Banner sales went live July 1. Some of the proceeds will help pay for the city’s cveterans’ memorial, which is still in the research and development phase.

Jean-Burher said the proposed memorial is one of the main goals of the city’s beautification master plan. The City Council is expected to hear some recommendations for the memorial when they meet July 22.

The banners are available to any veteran who lives in or lived in the City of Grand Blanc, owns or owned a business within the city, or graduated from Grand Blanc High School. City police officers and firefighters, past and present, also may purchase banners.

“We felt it was important to include everyone who has touched the city,” Jean-Buhrer said. “We may branch out further. Currently, there are 202 (spaces for banners). We may look to expand that outward.”