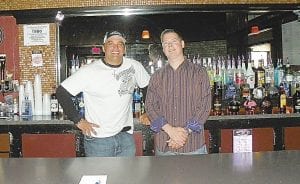 Specializing in Michigan products is one of many ideas being tried by boyhood buddies David Carter and Mike Schuchaskie, both of Lansing, who reopened the bar/restaurant/banquet center in late May. The site has struggled through about five incarnations since its heyday as a banquet center in the 1980s.

The new operators saw an opportunity in the 10,000-square-foot vacant building which has amenities including a bar and dance floor, a separate banquet area, 300 parking spaces, three fireplaces, a large well-equipped kitchen and proximity to freeways and a General Motors plant.

“It’s a challenge for us to make it successful,’’ Carter said. “We like a challenge.’’

“We’re all about supporting Michigan and Michigan products,’’ Schuchaskie said. That extends to food vendors including Abbott’s meats and Koegel’s hotdogs.

A Flint-area friend told them about the availability of the Bristol Road facility which they are leasing.

“It’s a beautiful property,’’ said Schuchaskie of the building’s overall condition. They have upgraded the bar area with a dance floor and deejay’s booth and are sprucing up the banquet area including building a stage to hold live music events.

They plan to build a following with a steady menu of events and food and drink specials. For example, on Michigan Monday’s, Cooper’s offers discounts on Michigan-made beers. Thursday is college night and Saturday is devoted to motorcycle enthusiasts.

Cooper’s also is the host site for Creek Speaks, an every-other-Tuesday networking event sponsored by the Swartz Creek Chamber of Commerce. The first one on July 12, starts with a networking hour at 5p.m.followedbya6p.m.meetingopen to all Chamber members who can enjoy drink specials and appetizers.

Cooper’s also books private parties in the banquet room. Other upcoming special events might include wine tastings and a dueling piano contest.

“We’ll try all kinds of things until we find out what works,’’ Schuchaskie said.

Cooper’s events wil be promoted up to 60 miles away, hoping to pull from the same base as entertainment venues that regularly attract Flint-area people to Pontiac and beyond.

Cooper’s has 20 employees but Schuchaskie said they always are looking for good bartenders and servers. Carter noted that the three cooks on staff were hired from the Mott Community College culinary school.