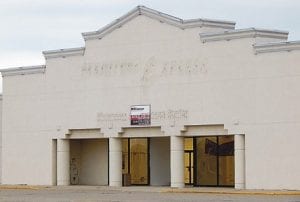 Signs of life include a lit interior, flooring workers inside, and a hiring banner hailing job openings at Ollie’s Bargain Outlet on Miller Road.

With its rallying bargain hunters war cry of “Good stuff cheap,’’ the Penn.- based chain is one of America’s largest retailers of closeouts, excess inventory, and salvage merchandise.

Ollie’s management did not return calls asking for details such as an opening date and the number of job openings, but signs of occupancy in the building includes crews on site working on the floor.

The jobs link to Flint says the store is now hiring for all positions.

“We are now accepting applications for the new store set up,’’ the job posting said. “Those hired will be considered for permanent positions once the store is open.”

All store employees receive a store discount. Other benefits such as medical, dental, vision, 401K and paid time off is offered, based on position.

Tracey Tucker, Flint Township economic enhancement director, said she first got wind of the store’s plans to open here about a month ago when Ollie’s applied for a permit to put up a “cute sign” on the building featuring a picture of Ollie.

“It’s a good fit for that location,’’ Tucker said of the outlet store.

Ollie’s will be located in the same strip mall as Gander Mountain outdoors store, behind smaller stores fronting Linden Road.

The 33,636 square-foot store was built in 1987 for a Sears Homelife furniture store that went out of business. More recently it housed a Furniture Express store which also closed circa 2007.

Ollie’s operates 141 stores in 13l states and currently is expanding its footprint across Michigan. It has stores in Monroe, Taylor and Westland, recently opened another in Farmington Hills, and announced plans to open two more in Lansing and Ypsilanti on July 31.

The first Ollie’s Bargain Outlet store opened July 29, 1982 in Mechanicsburg, Penn., according to a history posted on the store’s website.

Ollie’s sells famous brand-name goods in every department such as Rubbermaid, Mattel and Igloo. Much of the merchandise comes direct from manufacturers in the country and abroad. For instance, if a manufacturer makes too much of an item, or changes their packaging — Ollie’s buys it. They also work with insurance companies to buy salvage merchandise. If a local store has a fire, Ollie’s may purchase the inventory to sell at a drastically reduced price. Ollie’s has also liquidated major retail centers, working closely with banks to turn remaining inventory into cash.