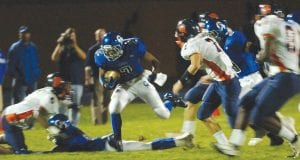 Shane Barron had four touchdowns and 326 all-purpose yards against Powers.

FLINT TWP.
— Shane Barron doesn’t do a lot of talking, but the Carman- Ainsworth junior sure listens well.

Barron had a brief chat with coach Nate Williams before last Friday’s homecoming game against Powers Catholic that went something like this:

“Shane,” said the coach, “you’ve returned a kickoff for a touchdown and scored on the rush and the pass this season, but you haven’t returned a punt yet.”

A couple of hours later, Barron gave his reply on the field, returning fourthquarter punts 67 yards and 57 yards for touchdowns a minute apart to lead the Cavaliers to a 42-21 victory over Powers Catholic.

The all-purpose standout also scored on a 70-yard run in the first quarter and a 31-yard pass from Allen Overton in the third as Carman-Ainsworth came from behind to beat the Chargers for the second time this season.

At the end of the night, Barron had rushed nine times for 130 yards, caught three passes for 53 yards and returned three punts for 143 yards for a grand total of 326 all-purpose yards. He also passed to Chris McKay for a two-point conversion.

“That kid is outstanding,” said Williams. “He doesn’t say anything, he just lines up and plays.”

The Cavs jumped ahead, 7-0, on Barron’s 70-yard sprint with 1:32 left in the first quarter and the first of Connor Storm’s four extra points. But Powers tied it on the first play of the second quarter on a 34-yard pass from Garrett Pougnet to Alton Yarbrough.

Carman-Ainsworth regained a 13-7 lead on Gerald Holmes’ 1-yard run with 3:29 left in the half, but Powers took a 14-13 edge with eight seconds left on Pougnet’s 9-yard pass to Prescott Myers and Tyler Stewart’s extra point.

Carman-Ainsworth fumbled the ensuing kickoff at its 23, but the Cavs’ defense stopped the Chargers without a score, and the offense and Barron took over.

The Cavs went ahead for good on another 1-yard Holmes run, and Barron took a handoff and passed to McKay for a 2-point conversion that made it 28-21 with 9:43 left in the game.

Holmes backed Barron with 76 yards on 15 carries, while Overton hit 9-of-19 passes for 137 yards. Justin Swims caught two passes for 49 yards and Nick Hill grabbed two for 16 yards. Jesse Johnson had eight tackles and forced a fumble, while Chad Coleman made seven tackles and broke up two passes to lead the defense.

The Cavs go on the road for a rematch with league champion Davison at 7 p.m. Friday.