A triumph over traditional norms

Brian Caine of Grand Blanc, explains the process of how he partnered with others locally to create the first Miracle League in Genesee County.

MUNDY TWP. — The love of baseball transcends American geographic boundaries and a local Grand Blanc high school student is in the business of making sure it can leap over other challenges as well.

Inspired by his aunt’s involvement with the organization, GBHS junior Brian Caine, is realizing a dream in having found a home for a Miracle League baseball field in Mundy Township. Miracle League promotes fully accessible recreational baseball fields for children with serious mental or physical challenges.

Caine stated he has played baseball since he was about 5 years old and when he found out about Miracle League, it inspired him to share this passion with those who are typically excluded. “I always wondered how these kids would be able to play on a (normal) field,” Caine said. “I learned about the project and how it could actually happen and I was just…I need to do this.”

Dave Guigear, Supervisor of the Mundy Township Board of Trustees explained they had been working on the proposed multi-million dollar park, potentially to be located near Hill and Van Slyke Roads, since 2013. 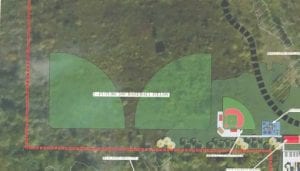 The Miracle League park is shown in the area highlighted by yellow in this preliminary design photo from Rowe Engineering.

“We’re really excited to be in a new park with everything coming in around us,” Caine said. His aunt 2017Vicki Caine started the Miracle League of Mid-Michigan in DeWitt which has been an amazing success. For her efforts, Vicki was honored with the Director’s Champion of Health Award at the Governor’s Fitness Awards in 2017.

The whole project is a multi-level partnership which also involves the Hill Road Improvement Authority (a sub-board of Mundy Twp.), Rowe Engineering, Flint Mass Transportation Authority, who has committed to transportation for the park. Additional partners include the Crim Fitness Foundation, Genesee Intermediate School District (GISD) and Carman- Ainsworth schools. 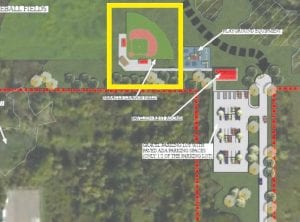 Guigear said he was introduced to Miracle League when they first began forming the idea for the park and was very impressed. Additionally, he hopes the park will help increase recreational activity for all residents. “Providing a safe community-based recreation opportunity was important to Mundy Township,” he said.

Caine had already submitted an application for a Miracle League Park which caused Mundy’s application to be denied; which brought them together as partners. “He’s a representative Grand Blanc schools should be proud of,” Guigear said, adding he was an “impressive” young man.

Caine stated it was a great day for the greater flint area, giving approximately 10,000 kids in Genesee County an opportunity to play baseball. He showed a moving video about what it means to kids to be able to play, which is available at: www.youtube.com/ watch?v=svAyDIUYzFo

Steve Tunnicliff, GISD Associate Superintendent stated, “We understand and realize the significant, positive impact that the Miracle League can have on thousands of children in our community… and certainly following that video I don’t see how anybody couldn’t see the need and the benefit for our community.”

The Miracle League of Greater Flint is now in the process of raising $400,000 to build the field and a handicapped accessible playground. A donation link is available on their website.

Miracle League teams play on a custom-designed, rubberized turf field that accommodates wheelchairs and other devices while helping to prevent injuries. The athletes are paired with an able-bodied peer, so kids will no longer be excluded by the challenge of a wheelchair on dirt or grass, or other limits they may face.

According to the Miracle League website (www.themiracleleague.net),the first Miracle League field opened in Conyers, Georgia in April 2000. Word spread and by 2002, fields opened all across the nation and beyond. There are presently over 240 Miracle League organizations including Puerto Rico and Canada, serving 200,000 plus children and adults.