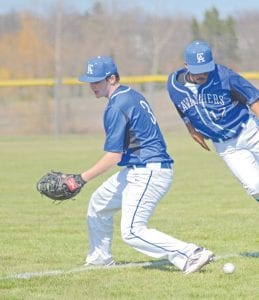 FLUSHING – While the rest of the district drew a bye for the opening round of the Div. 1 baseball district at Flushing, Carman-Ainsworth (8-16 overall) begins on May 31 at 4 p.m. against Flint Metro League rival Swartz Creek (5-6 Flint Metro League). The winner of that game advances to the semifinals against Kearsley (2-10 Metro) on June 4 at 10 a.m. while the other semifinals match-up takes place at 11:30 a.m. when the host Raiders (9-3 Metro) play Saginaw Heritage. The finals take place at 1 p.m.

“All of the teams are playing good baseball. We start with Swartz Creek which is having one of their strongest years in the past three seasons,” said Carman-Ainsworth coach Steve Faculak. “They lost to Linden 1-0. Linden is ranked No. 1 in their division. If we get past Creek we face either Flushing, the defending district champs; or we face sixth-ranked Heritage.”

Carman-Ainsworth’s 15-man roster has served it well thanks to the offensive contributions of Cooper Betancourt, Jawanza Edwards, Spencer Fiewig, Matt Durbin and Garret Gleason. The Cavs also like to set the pace using the defensive and pitching skills of Hunter Travis, Jacob Wilkos, Trent Green and Aaron Gagnon.

“Right now we are pitching well. Our ability to score runs has been our biggest weakness,” Faculak said. “We are hitting the ball well, just not able to put them together or make productive outs. We have gotten better in our situational hitting, but we still have a way to go to challenge for a district title.”

“Standouts have been our senior pitching with Austin Jerome. He has been lights out keeping us in games,” said Faculak. “Unfortunately our run support has not been behind him. Another standout is our catcher, senior Cooper Betancourt. Cooper is the strongest catcher in our league (which is no small task) and I would risk to say the county. He is so strong at his position, he simply takes away the running game from our opponents.”

The winner of this district advances to regionals on June 11.