Baseball districts right around the corner 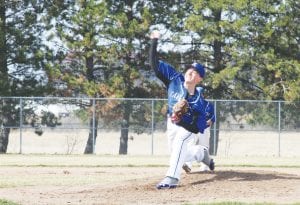 Austin Jerome and the Cavaliers drew a bye for round one of the postseason.

SWARTZ CREEK — After an up-and-down regular season dominated by running the gauntlet otherwise known as the Saginaw Valley League-South, the Carman-Ainsworth varsity baseball team is getting ready for the district round of the state tournament. While the Cavs’ last district title was in 1993, the talent on this year’s roster could be enough to turn this team’s postseason dreams into reality.

Because there are only four teams in this bracket, they all get first-round byes and instead start the postseason on May 30 with the Cavaliers (14-11 overall, 9-3 SVL-South) playing the host Dragons (17-17 overall, 7-7 Flint Metro League) in the regional semifinals at 12 p.m. Flushing (9-2 Metro) also has a second round contest with Kearsley (8-3 Metro) that day at 10 a.m. and the title game takes place at 2 p.m.

One factor working in Carman-Ainsworth’s favor has been the senior leadership of outfielder Leon Bell, third baseman Austin Yost and designated hitter Rodney Ellison. Combine all of that with the consistency of infielders like Ryan Macko, Ray Macko and Jawanza Edwards and certain parts of this team’s lineup will be absolutely no fun to deal with.

As for the pitching, even though Austin Jerome has been the workhorse in 2015, Chase Matusik and Isiah Wilson will also need to be on their game if this team is going to give itself the best chance to win the district title. Because of this, the defense of athletes like outfielders Spencer Flewig and Jacob Wilkos and catcher Cooper Betancourt will become that much more important.