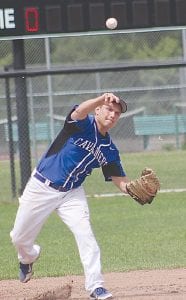 Carman-Ainsworth’s Alex Thompson throws to first base at the district game at Flushing last Saturday.

FLUSHING — While the Carman-Ainsworth varsity baseball team was finally starting to hit on all cylinders at the end of the 2013 regular season, the Michigan High School Athletic Association championship tournament is a completely different animal. Enter Flint Metro league rival Kearsley and a pitching staff that held the Cavaliers to just two hits for the contest on its way to eliminating Carman-Ainsworth, 5-0, in the first game of the No. 3-1 district semifinals last Saturday.

“I feel bad for my players. Many of them have been on varsity for the last three years,” said coach Tom Miller. “The kids put in a lot in the last two offseasons. I am thankful for what our seniors did establish. Changing the culture about baseball here at Carman- Ainsworth.”

After these two teams remained deadlocked in a scoreless tie for the initial two innings, Kearsley slowly but surely began to pull away by scoring unearned runs in the third, fourth and fifth. The Hornets then scored two more unearned insurance runs in the top of the seventh to help lock down this decision.

“It was frustrating to see us again give away runs. It has been the story of our season,” Miller said.

Standing out from the crowd for Carman-Ainsworth, 12-17 overall, was Brennan Gleason, who allowed five hits and three walks with six strikeouts in 4.2 innings pitched.

Alex Thompson and Entrice Mitchell accounted for the squad’s only two hits.

“We had high hopes. We started 5- 0 on the season, beating top programs like Saginaw Heritage and Powers,” said MIller. “In those games we played flawless defense, but after that we hit a funk with unearned runs.”

Kearsley went on to lose, 11-1, in the title game later that day to Flushing, which defeated Swartz Creek in the district’s other semifinal.