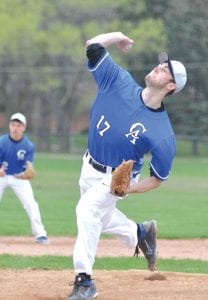 Carman-Ainsworth’s Brennan Gleason delivers a pitch to the plate.

FLINT TOWNSHIP — During a welcome break from all the trials and tribulations of the Saginaw Valley League on Tuesday, the Carman- Ainsworth varsity baseball team was able to steal the first game of a non-conference double feature from Durand, 4-1, before losing the nightcap, 4-3.

With Duane Haskins posting the save, it was Noah Reed who was able to claim the victory after giving up a run on three hits in six innings pitched.

“Things looked bleak for Durand in game two, as well, but the Railroaders scored four runs in the top of the seventh to overcome a 3-0 deficit and win the game. They benefited from the Cavalier error bug, as all four runs were unearned,” said coach Tom Miller. “Freshman call-up Austin Jerome started game two for us but did not get the decision in five innings pitched. Austin gave up three hits and struck out three batters. It is a shame Austin did not get the win. He showed such great poise for a freshman and gave our team a much-need boost, as we have a few of our top starters with tired arms from the amount of games we have played.”

Justin Hubbard took the reins for Carman- Ainsworth in the second contest with a single, a double and three RBI and adding a double each to the cause were Brennan Gleason and Connor Storms.

Non-conference competition has a world of challenges all its own, though, and that fact was never more evident than it was last Friday when Flint Metro League rival Clio swiped both halves of a twin bill from Carman-Ainsworth, 8-6 and 12-2.

“In game one, Carman-Ainsworth led in the bottom of the fifth, 6-1, before the Cavs gave up six unearned runs,” Miller said. “We continue to beat ourself in one inning that just hurts us. Brennan Gleason pitched game one and gave up one earned run with five strikeouts and six hits.”

Combining for six hits for Carman-Ainsworth were Entrice Mitchell and Hubbard.

The opening contest saw the Cavaliers put up seven hits in support of Noah Reed’s complete-game three-inning no-hitter with seven strikeouts and one unearned run allowed. Reed even helped his own cause by laying down a double, a single and three RBI and playing the Wildcats to the tune of a hit and two RBI each were Alex Thompson, Jamaal Dixon, Grant Roe, Brandon Bobcean and Chris Smith.

The difference in the second matchup was the 21 base-on-balls that Carman-Ainsowrth was able to draw from Northwestern, turning Andy Ramierez’s double into the teams only hit for the game. Reed got the games final three outs on the mound for the Cavs and struck out two.