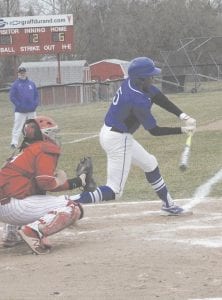 Carman-Ainsworth’s Wallace Hill makes a connection during a game against Swartz Creek on April 10. Photo by Brandon Pope

The game was held at an even 1-1 in the first inning. The Cavaliers then added two in the second, one in the third and three in the sixth. Bay City Central scored one in the third, four in the fourth and six in the fifth to take the win.

Cameron Koegel was 2-of-3 from the plate with two runs and an RBI. Gleason, Harrison Hogan and Wallace Hill added two hits and a run each. Alex Green had one hit and one run and Ezekiel Ochodnicky added a hit.

Carman-Ainsworth is at Powers Catholic today.