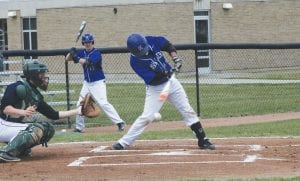 Jawanza Edwards and the Cavaliers start district play at Swartz Creek on Saturday.

FLINT — With summer vacation growing near as the school year draws to a close, the Carman-Ainsworth varsity baseball team hosted Durand over the holiday weekend for a non-conference doubleheader, winning 10-4 and 9-7.

In the initial contest, the Cavaliers scored nine runs between the second and fourth innings thanks, in part, to Ray Macko going 4-for-4 with two runs and Austin Jerome had three hits and two runs in four at-bats.

Leon Bell helped carry the offensive load at 2-for-3 with three RBI, Austin Yost allowed four earned runs on four hits and three walks with three strikeouts in five innings to earn the decision and Lucas Schoffer went 2-for-4 with four RBI and two runs. For the game the Cavs had 17 hits and two errors.

The nightcap didn’t get close until Durand scored five runs in the sixth inning to make it a two-run game, but that’s as close as it would get after giving up six runs to Carman-Ainsworth in the fourth and fifth. With 12 hits and three errors for the contest, Jawanza Edwards went 3-for-3 with three runs, Trent Green was 2-for-4 with two RBI and a run and Hunter Travis went 1-for-4.

Aaron Gagnon also had a hit and two RBI in three trips to the plate in addition to pitching 1-2/3 innings and allowing a hit and Cooper Betancourt was 2-for-4 with two RBI and a run for the Cavaliers, 7-3 Saginaw Valley League.

Carman-Ainsworth starts the postseason on May 30 against Swartz Creek at noon after the 10 a.m. Flushing/Kearsley game.