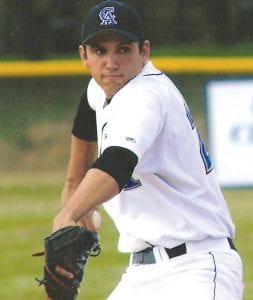 Former Cavaliers pitcher Josh Loy goes into his windup during his time at Carman-Ainsworth before moving on to play for the Mott Community College baseball team.

FLINT — By dedicating its home baseball field at the northeast corner of Kearsley Park to former Athletic Director and coach Ernie Myers last Friday, Mott Community College is continuing a tradition of achievement that started in the 1960’s when Myers led the basketball team to 11 conference titles, three Region XII championships and three top 10 finishes in the National Junior College Athletic Association tournament.

Now a member of the Greater Flint Athletic Hall of Fame, as well as the NJCAA Hall of Fame, the groundwork Myers laid down for the Bears’ sports program is still paying dividends to this very day, a fact that is more than evident on the local scene as area graduates continue to populate the diamond for Mott under head coach Shawn Brown.

Having graduated from Davison high school in 1993 and taking the field for Mott from 1994-96, including an initial season that included All-League honors, throwing a nohitter and leading the Bears in wins, strikeouts and innings pitched as team captain, Brown has created a pipeline for himself and his program that’s given area athletes the chance to continue their athletic careers at the junior college level and beyond.

This includes Goodrich catcher Jake Bourassa and Grand Blanc products AJ Shemes and Darrell Wynkoop, who suited up for Mott last season alongside former Lapeer West pitchers Casey Potts and Christian Graham. With Wynkoop moving on to play for Div. II Tiffin University, the Bears went 22-25 overall, 14-16 Michigan Community College Athletic Association for 2011. Last year Bourassa hit .200 for Mott on 21 hits in 105 at bats with 18 runs and 15 RBI while Shemes only got in on eight games for Mott yet still put up three hits, two runs and two RBI.

In 2010, it was former Carman- Ainsworth outfielder Tyson Cobb and Davison graduates Kevin Yoesting and Trevor Cousineau that kept the local connection alive with help from pitchers Jamie Logan of Lapeer East and Brown City’s Ryan Hoff. With a name that speaks to baseball’s heyday, Cobb swung his way to a .336 batting average that year in 36 appearances for Mott on 45 hits in 134 trips to the plate with 34 RBI and 23 runs. The former Cavalier played right into that throwback role by also taking the mound for the Bears, going 0-1 with three runs allowed, one earned, in an inning of work while guiding his team to a record of 22-20 overall, 14-14 MCCAA for 2010.

The year before that, it was the Carman-Ainsworth pitcher/catcher combo of Josh Loy and Kraig Carpenter that kept the local connection in tact with an assist from pitchers Greg Moriarty and Joe Seagraves of Lapeer East and LakeVille’s Tyler Griswold. That season Carpenter hit .269 for Mott on 25 hits in 93 at bats with 11 RBI and two doubles and Loy finished the campaign at 2-2 with 14 strikeouts in 28.1 innings pitched. For 2009 the Bears slid in at 20-27 overall, 11-19 MCCAA.