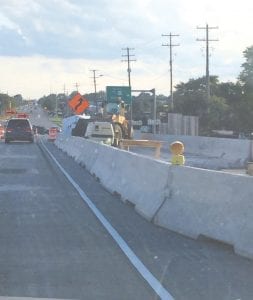 BEAMING – Road crews have begun work on repairing the Miller Road bridge over I-75. The right lane of westbound Miller at I-75 has been closed since December 21 after the overpass bridge was struck by a semi-trailer truck traveling southbound on I-75. At that time, a spokesperson for the Michigan Department of Transportation said that the lane might remain closed until October or November of this year, because of the time frame needed to order beam replacements. The MDOT spokesperson also said that the replacement project would be done sooner, If the beams were ready sooner than expected. No completion date has been given but the repair work that began July 10 included pouring a new bridge deck surface. At that time, Miller Road traffic across the bridge in both directions was reduced to one lane. Two eastbound lanes are now open and one westbound lane. Crews are mainly working overnight but the work so far has included brief freeway and ramp closures. This work is part of an overall $426,000 investment to repair damage to the overpass, according to an MDOT press release.