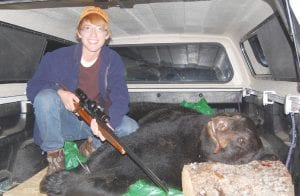 DAVISON — After discussions at its March 7 meeting, the Natural Resource Commission was to take up a proposal to ban chocolate as a product in bear bait across the state. The Commission voted to keep the bait regulations as is, asking the Dept. of Natural Resources to monitor and evaluate the situation.

“If we get indications that more bears and wildlife are affected, they will look at the regulations again,” said Adam Bump, Bear and Furbearer specialist with the DNR. “Michigan Bear Hunters Association members and other organizations were also asked to educate their members on the toxic nature of bears and to possibly lean away from using chocolate.”

Chocolate is commonly used in baiting bear, but also is toxic to young cubs, dogs, raccoons, opossums and other wildlife, especially the dark or semi-sweet varieties. Theobromine, an alkaloid found in chocolate and other substances, is the toxic element that can sicken and kill animals.

The Michigan Bear Hunter’s Association opposed the ban and had been stressing that it would have rather done its job in educating hunters on the health hazards to wildlife. That task now falls upon them and other hunting and outdoor organizations to educate the public about the toxicity to bears.

In recent years, cocoa bark poisoning cases were reported across the state, as dogs were drawn to the smell and sweet taste in the landscape bark, consuming amounts that caused serious illness and death.

Michigan’s bear population has grown steadily since the 1990s, says the Dept. of Natural Resources. There are an estimated 19,000 bears—including cubs—occupying approximately 35,000 square miles of bear habitat in the Upper and Northern Lower Peninsula, with more than 85 percent taking up residence in the UP where large tracts of state, federal, and private commercial forest lands contain good to excellent bear habitat. The bear populations in both peninsulas remain stable or increasing, with an increase of bear sightings in the southern Lower Peninsula.

The black bear is the only species of bear in the state, with most black or dark brown in color. An average adult black bear typically stands three feet tall at the shoulders when on all fours. Males can weigh up to 500 pounds and females up to 300 pounds. Michigan’s black bears have been known to live past 30 years, and most recorded deaths are from hunting or vehicle collision, says the DNR.

Because of the healthy bear population, hunting was first regulated in 1925 when the species was declared a game animal. Baiting bears has always been legal in the state, and hunting bear with dogs was legalized in 1939. Bear trapping was outlawed in 1952 and bear cubs became protected in 1948. In 1955, it became illegal to shoot any female bear when accompanied by cubs.

Locally, Davison High junior Drew Marsh bagged the second largest bear taken by a youth on September 27, 2010. It was also one of the 200 largest black bears harvested in Michigan according to Michigan Commemorative Bucks, the state record keeper. Marsh bagged his bruin in Marquette County. It weighed in at 405 lbs. with a dry skull score of 19-14/16.