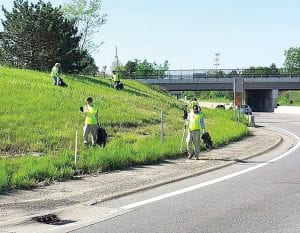 FLINT TWP. — After being rained out of the first date in early May, the first Flint Township Gateway Beautification Project went off without a hitch.

Township Supervisor Karyn Miller publicly thanked the many volunteer and donors who pitched in to make the highway ramp clean-up a success.

More than 25 volunteers logged 125 man hours to collect 75 bags of trash along the freeway ramps at Corunna, Miller and Bristol roads, organizers said. That added up to about 1,500 pounds of trash.

Hands on Genesee County Resource helped by allowing use of its webpage to collect volunteers, said Deb Nebraski, assistant to supervisor Miller.

New Creation Church on Lennon Road sent the highest number of volunteers. Comfort Inn on Austin’s Parkway contributed use of its facility as a gathering and refreshment site. MTA sent a bus and driver that day to keep volunteers safe.

Other volunteers were from Americorp NCC of Iowa, Davenport University and Northwood University. Other helpers were township residents James Nebraski and Nina MacGillivray and Jerry Preston of the West Flint Business Association. 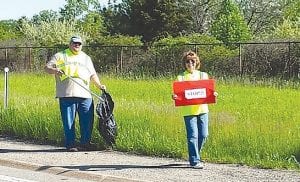 Workers donned bright green vests for high visibility while they picked up trash along busy I-75 freeway exit and entrance ramps during the first of many township beautification events.

Supplies were provided by Keep Genesee County Beautiful and MDOT.

The township plans to use grant money to keep grass mowed along the highway entrance and exit ramps.

Organizers said they hope to plan more clean-ups in the near future. Students from the College Town Collaborative were initially signed up to help but the rescheduled rain date fell to close to graduations and other endof school-year activities. 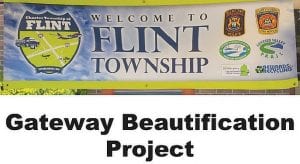 The College Town Collaborative is made up of representatives from Baker College of Flint, Davenport University, Kettering University, Mott Community College, Northwood University, and the University of Michigan- Flint as well as HandsOn Genesee, the volunteer center for Flint and Genesee County.

The Collaborative have pledged to help with future clean-up events.