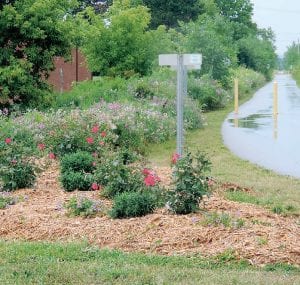 A patch of weeds was transformed into a bed or roses by the annual beautification project of the township’s Parks and Recreation Advisory Committee.

The flowerbed is on the east side of the road just south of Lennon Road where the Genesee Valley Trail intersects Linden Road.

“It is our fifth project,’’ said Jim McClung, parks and rec chairman, about the annual beatification effort funded in part by a $1,000 grant from Keep Genesee County Beautiful (KGCB).

In the past, KGCB funds have been used for plantings at the I-75 freeway exit on Corunna Road, flowerbeds at the township hall and other places along the recreational trail.

KCGB have given the rose bed a thumbs-up, McClung, noting that organizers visit grand-funded sites to make sure that the money is used as promised.

About ten volunteers assisted in planting the rosebushes and a few other perennials, McClung said. Those included township trustee Belenda Parker and her daughter Kimberley and the grandchildren of parks and rec committee member Jackie Perina.

“It was the smoothest operation we have ever done,’’ McClung said. “We started at 8 a.m. and we were done by noon.”

The township supplied four yards of mulch and a landscaping supplier at Miller and Dye roads trucked in seven yards of black dirt.

The planting ground is a former railroad track bed that is hard as a brick and had to be built up about a foot with topsoil for anything planted to be able to grow, McClung said.

The flowers were purchased at Wojo’s in Davison.

“They work with us. They tell us what works good in certain areas,’’ McClung said.

It is the nature of the rosebushes to be even more beautiful when they bloom again next year, he said. It was the first time the group has planted rosebushes.

All park and rec plantings are perennials that return every year.

None of it would be possible without the generous support each year of KGCG, McClung said.

The group also planted more flowers along nearby Dutcher Road.