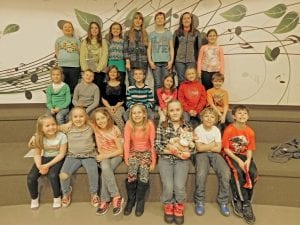 SWARTZ CREEK – Bedbugs are coming to Swartz Creek, but don’t call the exterminator.

“Bedbugs” is a short play that will be performed by 20 of the community’s budding young actors from Dieck, Morrish and Syring elementary schools.

“It’s really a very, very cute show,” said Craig Martin, executive director of the Performing Arts Center. “Bedbugs” is the second all-elementary show that Martin has presented at the PAC.

“Bedbugs” centers on a little girl, Marie, and the bedbugs who live under her covers.

“The bedbugs think Marie is an evil witch, because every time she jumps on the bed she causes earthquakes,” said Martin. “They also hear her mother say, ‘Sleep tight. Don’t let the bedbugs bite. But if they do, squeeze them tight and they won’t bite tomorrow night,’ and they think she’s out to get them.”

One fun aspect of the show is the bisected set design, which includes lighting that alternates the audience’s attention between the side with Marie’s bedroom and the side that depicts the world beneath the blankets.

“Whatever Marie’s bedspread will look like, we will paint the other side to look like it,” said Martin. “We will have over-sized props like dice or maybe Lifesavers … things the bedbugs found in the bed. We’ll have a bench that will be a harmonica. Maybe a pack of gum.”

In their miniature world, the bedbugs assemble and discuss plans for dealing with the threat of Marie. They are faced with a moral dilemma: to attack or talk it out.

“They decide to attack, but that doesn’t work,” said Martin. “Then they talk, and they realize they were wrong for not talking in the first place. It’s really about conflict resolution.”

The bedbugs will each have his or her own unique personality, some of which are likely to resonate with members of the audience.

“We have some characters,” said Martin. “(The performers) are really very good. They’re really cute.”

Bedbug archetypes include the cheerleader, the mayor and the hippy, among others. Each will be dressed in full bedbug regalia, replete with extra arms and antennae.