Beecher beats Cavs on the hardwood 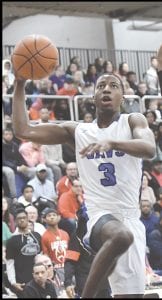 Carman-Ainsworth’s Darrell Scroggins goes up for the jam. Photo by Terry Lyons

FLINT – The Carman-Ainsworth boys’ basketball team tallied its first loss of the season last Friday, as the Cavaliers lost to Flint Beecher 60-55 in the annual Steve Schmidt Roundball Classic at Mott Community College.

Beecher opened the game on a 9-2 run and was able to forge a 27-24 advantage by halftime. The Pirates extended the lead to 44-39 by the end of the third quarter before both teams scored 16 points in the final frame.