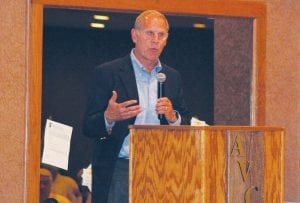 GRAND BLANC — There was a sea of maize and blue as far as the eye could see last Tuesday at Atlas Valley Country Club in Grand Blanc, and the festivities lasted all day long. Once again, Atlas Valley played host to the annual University of Michigan Club of Greater Flint’s Golf Outing and Sports Night.

“It’s really great that people, just like this whole room of people, who have supported our athletic program so far and for so long,” said Beilein during his speech. “What’s unique about Michigan is its this great, global, researching University with school spirit that you’d find at the small, private schools.”

The outing began with a shotgun start for golf at noon, however, tee times were also available from 7:00- 7:30 a.m. Registration and lunch took place at 11 a.m. After the golfing concluded, a social hour was held inside the club at 5 p.m. and dinner followed at 6 p.m.

Nearly everyone in attendance was decked out in Michigan apparel, and the banquet room itself was filled with Michigan merchandise that was being auctioned off. Some of the merchandise was also given away as a prize for accomplishments during the golf outing, including straightest drive and the closest shot to the hole.

Once dinner began to wrap up, former

UM sports information director Bruce Madej got up and spoke a bit before bringing Beilein to the stage as the keynote speaker. Initially, Beilein’s speech was scheduled for later, but due to the coach’s busy schedule, they decided to bring Beilein up right after Madej.

There was also a scholarship giveaway, which was awarded to recent Flint Powers Catholic graduate and soon-to-be UM freshman Kennedy Clothier.

“Embrace every bit of it. Go to all kinds of sporting events,” Beilein said to Clothier during his speech. “You’ll meet all kinds of friends and it’s a wonderful experience. That’s why all of these people are here right now. That’s why we’ve had such a tremendous alumni association”

Beilein also spoke about his first meeting with this year’s team, the 100th edition of the Michigan men’s basketball program, while also commenting on some of the struggles from this past season.

“If you watched us, you know that team 99 was tough as nails,” added Beilein. “They tried to do everything they could, but we lost in overtime to two Final Four teams. But I’m not going to give our guys any illusion that we’re close. We’ve moved on with tough, hard-nosed, smart kids that are all about the team. We can’t wait to attack going forward.”