Bell, Peterson to be inducted into Flint Hall 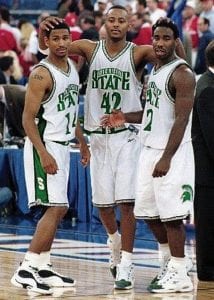 Charlie Bell (left) and Morris Peterson (center) are pictured with teammate Mateen Cleaves during their run as the Flintstones at Michigan State. Bell and Peterson will be inducted into the Greater Flint Area Sports Hall of Fame on Dec. 3.

GRAND BLANC – The Greater Flint Area Sports Hall of Fame is set to induct its 2016 class on Saturday, Dec. 3 with some big names on the docket. Most notably former NBA players and national champions at Michigan State, Charlie Bell and Morris Peterson. Alongside Mateen Cleaves, Bell and Peterson helped form the “Flintstones”, leading MSU to the national title.

Peterson played 11 seasons in the NBA, mostly with the Toronto Raptors, who he is now an analyst for on TSN. He also had a successful stint with the New Orleans Hornets before playing his final games in the league with the Oklahoma City Thunder. Peterson is active in the community and put together a charity basketball game in May to benefit the Flint water crisis.

Bell played in parts of eight NBA seasons with the Phoenix Suns, Dallas Mavericks, Milwaukee Bucks and Golden State Warriors. Bell also spent a few seasons playing pro basketball in Italy and Spain from 2002-2005. He returned to the NBA in 2005-06 with Milwaukee and immediately became an impact player for the Bucks, playing there the next five seasons before a final year in Golden State.

Jon Schriner will also be inducted for his impact on the area in the field of sports medicine.

Walton is widely noted for being Flint’s greatest soccer player. A Flint Northern alum, Walton was an All-American in college at Oakland University before moving on to a solid career in the National Professional Soccer League and United Soccer League.

Another Flint Northern grad was Lowe- Carroll. After her high school years with the Vikings, Lowe-Carroll moved on to the University of Kentucky where she built herself into an All-American. She still holds many school records.

Head has been involved in baseball for many years and was once a scout in the Major Leagues for the Toronto Blue Jays and Baltimore Orioles. He also had a great coaching career building his Flint Connie Mack squad into a six-time state champion and also led them to a Connie Mack World Series Championship before a successful run as the coach at Saginaw Valley State.

Raffin is well known across the state when it comes to track and field and cross country. For almost 40 years, Raffin was the coach at Holly in both sports and produced four state championships while with the Bronchos.

Schriner helped found the American Society of Sports Medicine while he also worked for the Crim Festival of Races for 26 years as medical director.

The 1977 Bobcats’ cross country squad was loaded with three All-State athletes that helped lead the team to a Big Nine title and eventually a Class A state championship.

The 1975 Bentley baseball team was also a state champion, collecting an overall record of 24-5 on their way to winning a league and Class B state title. They didn’t lose a single game within their conference.

Last, but certainly not least, is the 1994-95 Flint Northern girls’ basketball team, which went on to secure back-toback Class A state titles. Under coach Letitia Hughley, the Lady Vikings were dominant, led by former WNBA champion Deanna Nolan, who was named Michigan’s Miss Basketball in 1995.

The induction banquet will be held Dec. 3 at the Genesys Athletic Club, the 37th edition of the ceremony. For more information, visit gfashof.org or call 810- 397-7305.