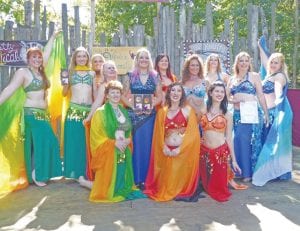 GENESEE COUNTY – Members of Troupe Sabba Zimora and Brenda’s Belly Dancing took home the 1st place designation for ensemble at the Mid- Michigan Renaissance Festival’s Belly Dance Competition. The group was costumed in colors of the elements of fire, water, and earth. They had chosen to choreograph to the song “Sweet Dancer” by Tartanic out of Houston, Texas who travels the States performing at Renaissance fairs. The dance made use of veils as props and did a short technical feature of Troupe Sabba Zimora, the professional group members who do paid shows.

The group is gearing up to complete their dances for the year and welcome in the new beginner class. New dancers are being accepted. The next public performance will be at their hafla, or dancer showcase and party, usually held at the end of November/early December. Anyone interested in attending the show is encouraged to check the website and follow social media under / brendasbellydancing for updates details as they become available. – G.G.