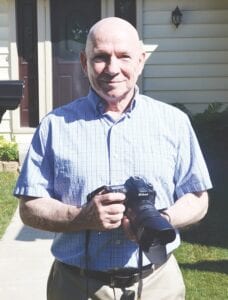 FLUSHING — The Flushing community is mourning the passing of photographer Gary Nickel and remembering the legacy of volunteerism he left behind.

Nickel, 76, died at McLaren Flint Hospital on Dec. 7 from COVID-19 related complications. He had been hospitalized for several weeks after showing COVID-19 symptoms around Veterans Day, according to his family.

Due to pandemic restrictions, Nickel’s funeral service was livestreamed from Rossell Funeral Home in Flushing on Dec. 11. A private burial for Nickel was held at Great Lakes National Cemetery in Holly.

Nickel, a 24-year resident of Flushing, was renowned in the community for his volunteer photography work and his passion for documenting the city’s people and events. He was a regular photographer for the Flushing Area Chamber of Commerce for over a decade, covering numerous ribbon cuttings, Chamber networking luncheons and grand openings for local businesses.

Nickel was also a fixture at community events, where he took a variety of pictures at Flushing Summer Festival, Harvest Fest, the Candlewalk, Trail of Terror, Flushing Homecoming and numerous other functions. He also volunteered his time to take photos for the Flushing Area Senior Center, Old Newsboys of Flint and Whaley Children’s Center. All of this he did without charging a cent.

For Nickel, photography was a way to give back to the community he loved.

“I want to make a difference in our town, state, nation and the world,” Nickel told the Flushing View in a 2018 interview. “I can’t give thousands of dollars like some people can, but I can take pictures and help advertise (for a cause).”

When he was finished with a photoshoot, Nickel would spend hours editing his pictures before submitting them to the Chamber or posting them to social media. He also contributed photos for many editions of the Flushing View.

In addition to his photography, Nickel served on the Flushing Area Senior Center Board of Directors and was an active member of Westside Baptist Church on Pasadena Avenue in Flushing. He was named Flushing’s “Citizen of Year” in 2011 by the Chamber.

Following his passing, the Flushing Area Chamber of Commerce Board of Directors and Chamber staff released a statement of support for Nickel and his family.

“Life is the greatest gift that God has given us. Death is only a bridge towards eternal life with God. Certainly, heaven is rejoicing for another soul has finally reached his true home.

“Gary, we will be forever grateful for the joy, commitment and love of our community that you provided every day. You simply will never be replaced, and we will forever miss you.”

Mary Gail McPhee, owner of MGM Dance in downtown Flushing and longtime friend of the Nickel family, described Gary Nickel as the city’s icon and historian.

“He documented life for every one of us with his beautiful photography,” McPhee said. “Sunrises, sunsets. Animals and people. But he was so much more than that. He was the kindest, most loving servant of God who lived his faith, loved everyone and was an example for all humankind.”

Gary Edgar Nickel was born in Fenton on Jan. 15, 1944, the son of Leo and Marion (Lossing) Nickel. He graduated from Ainsworth High School in 1962 and entered the United States Marine Corp. Upon discharge, he started work at General Motors at QPC on Van Slyke Road in Flint. Nickel later transferred to Pontiac in 1997, then retired after 33 years with GM.