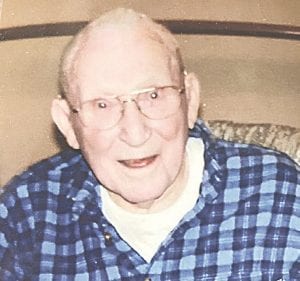 BURTON — Morris Abbott, 95, passed away April 28, leaving behind his cherished family and a huge host of friends from the many facets of his very productive life.

For his last year and a half, he lived at Brookdale in Davison where he was well liked and cared for. Sadly, because of the nationwide virus that changed our lives, his became very lonely when his family and friends could no long visit.

Though he was a tough fellow, the depression of that time finally wore down his resolve to live. It was too much, in addition to not being able to do his various hobbies of making wonderful projects in his wood working shop.

Morris proudly served in the U. S. Navy, having joined it shortly after the attack on Pearl Harbor. He witnessed much while serving in the Japanese theatre of the War, even to seeing the American flag being raised on Iwo Jima. He was a member of the Stagehand Local #201 for many years.

During that time, he was allowed to be the only person, other than the artist from Italy who created it, to be able to disassemble and clean the huge, golden Dandelion chandelier in the foyer of Whiting Auditorium.

As he loved to travel, he and his son, Les, enjoyed many miles on motorcycles, having covered roads all over the U.S. and even to other countries. Morris enjoyed many years of friendly service in Burton as a very active member of the Friends of the Burton Memorial Library.

Being an avid reader and history buff, he had a steady stream of books to enjoy. As a Friend, he even built onto his garage a space for the group to store thousands of books, built a trailer to transport them for book sales and happily opened his garage for us to gather for quarterly sort days. In the winter he would fire up the stove to keep us warm and we would often sit in his kitchen to enjoy meals, drink coffee and listen to his many stories of his life.

He loved children and always paid attention to what they said and how they talked to him. His own grandchildren got to ride along on many of the trips he took while motoring across the country.

At his home he had a ready supply of toys for them to play with and even had a bucket of toys at the nursing home, lest they not have anything to do when they visited. The children of the Friends all were happy to see Mr. Morris and avidly watched him.

He would explain the tools he had and how to use them. I watched as Zane, son of Amy and Darin, followed him around the shop, with wide eyes, as he learned how to use tools to create nice wooden items. One of the kids was a shy gal, Kayla, a granddaughter of Jim and Monica, who he called “Shadow,” because she was often there, but hiding by her grandpa.

Our own great grandson, Jaxon, like visiting him and called him Grandpa Morris. Not as often as we would have liked to do, several of our group would take him out for lunch at the Apollo in Davison and also to picnics we held. He just loved being with people. Another thing he loved was finally getting to sit inside the newly built Book Barn, adjacent to the Burton Memorial Library. He just grinned with pleasure to see it. Now it is filled with books on shelves of wood that he himself milled, cut to size and had in his own large wood storage area.

In that space we also have a special desk that was built by him and his wood working buddy, Larry Myers. Morris would awaken each morning with ideas in his head of what he could do that day and he created many of those projects for his own favorite library and items for others, also.

Often, they would confer with him on certain things that they needed, and he would build them. Inside the BML one can see many items that came from his shop that are used every day by young and old. A table for kids and stools is specially constructed of 16 plywood sheets and he purposely built the stools to be strong enough for elephants. He brought over a prototype one day to show us at home how he had patterned them from his days of working behind the scenes for the Shrine Circus at the IMA in Flint. Like Morris we could go on and on, because he filled his years with such an array of activities and interests. We were surely blessed to have him as long as we did. He left a huge footprint on Burton as he offered his abilities as a volunteer and friend to many. Without him our community would be much poorer. As you live, like Morris Abbott did, let your life be a measure of the good that is done, and memories will last forever. He never sought personal glory, but we can’t let his life be forgotten, now that he’s gone.