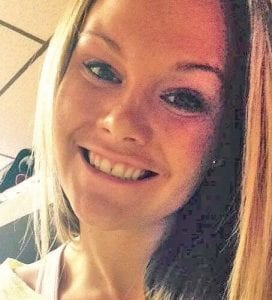 Sherman’s Lounge is hosting a benefit for Savanna Lacey, 21, a former All Big Nine Carman-Ainsworth soccer goalie, who is recovering from a stroke and brain surgery.

FLINT TWP. — A benefit to raise funds to help pay medical bills for Savanna Lacey, a 2012 graduate of Carman-Ainsworth High School, is being planned for 1-6 p.m., Jan. 31 at Sherman’s Lounge, 4211 Fenton Road,

“They called her a miracle in the hospital; after the type of stroke she had there is usually a pretty long recovery, if there is one,’’ said her mother Charlene Lavelle, an employee at Sherman’s Lounge, who has chronicled every day of her daughter’s ordeal on Facebook since that fateful date last November when she rushed Savanna to Hurley Medical Center with what seemed like severe flu symptoms.

But by the time she reached the hospital she was experiencing numbness on the right side of her body and unable to uncross her legs or write her name.

It has been a long road toward recovery, but Savanna was released from the hospital Jan. 13. She still faces additional surgery to replace bone flaps in her skull. Savanna is undergoing speech, physical and other therapies and probably looking at about a year to full recovery, Lavelle said.

Doctors attributed her youth and athleticism to her favorable long-term prognosis.

Before her illness, Savanna who is single and childless lived on her own. The cause of Savanna’s stroke remains a mystery but her family is looking ahead, not back, Lavelle said.

“Through this whole ordeal, I am a firm believer that everything happens for a reason,” said Lavelle, who has two younger children ages 7 and 8. ‘This has drawn our family closer together and to God.”

The fundraiser at Sherman’s will feature live entertainment and offer a 50/50 drawing, a silent auction, raffles for items and gift cards, Lavelle said. They are accepting donations now and also looking for contributions from local businesses.

Her Carman-Ainsworth friends have been supportive since the beginning.

“It is our belief that no matter where you go, you are always part of the CA Soccer Sisterhood,” said Jessyca Matthews, a CAHS teacher who was Savanna’s English teacher and soccer coach.

“When I told the girls about her getting rushed to the hospital, they hopped right into action. Two of the girls made banners that had our slogan #SavStrong for her to keep in her room until she left the hospital.”

The team also sponsored several fundraisers including money to buy Christmas gifts for Savanna and her family.

Matthews, who visited Savanna while she was hospitalized, remembers her as a humorous, determined girl who is never at a lost for words.

“If it was something she was passionate about, she would find a way to be successful at it,” Matthews said.” When she became my goal keeper, she had a mindset that nothing would stop her. She would tell girls that failure wasn’t an option. … She was that spirit that all coaches need in their program – someone who worked hard, but knew when to make people smile.”

“Each girl who plays for me is like one of my soccer daughters, and knowing that I couldn’t be there to help her get up when she was down was painful,” Matthew said. “When I finally got a chance to visit, and to hear her crack her first joke, I knew that things would be fine. The girl, despite being a little thinner and having to deal with the effects of the removal of part of her skull cap, was still there.”

Matthews is gathering donations and arranging to have more #Savstrong t-shirts made to sell at the benefit.

Matthews said she also is hoping Savanna will be well enough by spring to visit the C-A soccer field and receive hugs and appreciation from her soccer sisters.