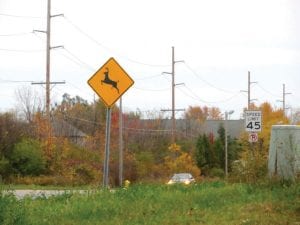 Signs like this one on Lennon Road caution motorists by marking known places where deer and vehicles have crossed paths. Since daylight savings time ended earlier this month, dusk comes during the evening commute -a time when deer are more active. In 2014, Genesee County ranked ninth out of 83 counties in Michigan with the highest incidents of deer/vehicle crashes, according to the Michigan Deer Crash Coalition (MDCC), a traffic safety organization. Oakland County ranked first and Lapeer County was fourth. MDCC advises drivers to be alert, especially in the vicinity of deer warning signs. October and November are the most prevalent months and dusk to dawn the most dangerous time of day when 80 percent of crashes occur on two-lane roads. For more information about what to do when encountering deer on the road, visit the MDCC web site at http:// www.michigandeercrash.com/